This virtual exhibition will showcase the work of local and international artists. The compilation of various oil paintings demonstrates the versatility of this medium.

Using oil paint as a vehicle, the artists let us explore encounters they’ve had with the world around them, their impressions of it, abstractions of it, and beyond. Because of the diverse display of oil paintings, each viewer can find a work that they can connect with.

Dorothy Siclare has been making art throughout her life, and has become even more involved after leaving the workforce, making it her career rather than a hobby. She is influenced by beauty and finds inspiration in nature and children. Her early works are more realistic, and while she would paint her subject as she would see it, Siclare believes a part of herself is in each of her works, as well as her subject’s soul. Her later works are more cerebral and intuitive, reflecting her processing of meditating before painting. Bold colors influence Siclare’s work, and she has recently found new expression in abstraction. With her art, Siclare hopes to evoke strong feelings from her viewers.


Jamie Greenfield works in this exhibition reflect an ecosystem that encompasses nature, cosmology, and the connection between the inner mind and the outer natural world. The objects in her works seem to have a tenuous relation to one another, yet they are anchored in a structured space. Some of these relations are provided to the viewer while others are more ambiguous, and may be the result of memory or longing. Greenfield draws upon personal history in combination with observation of light and form, and often does not have a preconceived plan for a work, allowing the piece to evolve and process as it is created. She views the moth as a potent metaphor: beautiful and dangerous, the brevity of its life coupled with its incessant movement towards the light appears to reflect the human existential dilemma.

Ogunlesi Paul is a graduate of the prestigious Yaba College of Technology in Lagos, Nigeria, where he obtained a National Diploma in General Art (majoring in Painting). He worked as an IT student at Defactori Art Studio under Akintunde O. John. He has participated in numerous art workshops, symposiums, and exhibitions–such as the OYASAF marble print workshop, The Artmiabo Art workshop, The Medallion Art workshop in honor of Kolade Oshinowo’s birthday, Art in Medicine Fellowship and Workshop 2018, and Artbridge Project Symposium–both within the country and internationally. Paul has been a member of The Beyond Borders Artists Association of Nigeria since 2017 and began working as an art instructor at THE METAPHOR in Lagos, Nigeria in 2020.


Patricia Hynes works are made of narratives of ordinary people in natural settings that challenge viewers to reflect upon their own lives. She believes that every reaction is unique and anyone can be a subject of her paintings. She focuses on the moments that are difficult for the eye and memory to capture, which are pivotal to revealing the dynamic of a painting. To achieve this, she takes numerous  “action” photographs of subjects, then transforms these images into a montage that becomes a visual concept. The paintings visual origins are transformed through composition and pigment, leading her studies on how people react to life situations. She paints in oils using a varied of small brushes to create expressive visuality and a reading tempo that actively engage viewers in thought and interpretation of her works.

Paul Fuentes has been directing national commercials and campaigns at his own production company with Screen Gems. His knowledge and understandings of advertising, pop culture, theater, film, and classic and modern masters have informed his paintings throughout time. After graduating from Temple University, Fuentes moved to New York where his paintings and illustrations appeared in national ads and publications including The New York Times. He worked in broadcast advertising and promotion at NBC and later HBO, where he became a creative director and then began to direct. He soon opened his own production company with Screen Gems where he directed hundreds of national commercials and campaigns.

Stephanie Deshpande is a representational painter living in northern New Jersey, and is best known for her psychological portraits and narrative paintings. Her works combine a love of realism with personal allegories and create unearth hidden emotions that capture the quiet drama of the world around her. She has showcased her paintings in several noticeable exhibitions such as Painting Today for International Women’s Day 2019 in Barcelona, Spain, and American Women Artists for the Tuscon Art Museum in Tuscon Arizona.


Todd Doney has worked with advertising agencies, publishing companies, sport teams and other corporations where he created posters, point of purchase displays, magazine ads, magazine covers, children’s books, book covers and CD covers. Doney has worked with private organizations and individual customers to create for them landscapes, portraits and other artworks. A resident of New Jersey, Doney draws inspiration for his artwork from the Great Swamp Wildlife Refuge next to his home. He shares his expertise in art through teaching. He is currently an associate professor of art at the County College of Morris in Randolph, NJ, where he teaches drawing, painting, and foundation classes. Doney has also held teaching positions at New Jersey City University, Seton Hall University, The College of Saint Elizabeth and the American Academy of Art in Chicago.

Kathleen Shaver’s artwork dares to defy the status quo by seeking out the primal within the often sanitized and synthetic confines of human civilization in the twenty first century. With an approach forged by a love for paint and an expressionistic vision, Shaver works from a place where intuitive gestures and mark-making formulate a visual quest for a pre-linguistic awareness. Her inspiration is derived from a remarkable source, the Lascaux cave painters, whose time, culture, and language transcending images inform her primitivist style. Though her paintings never provide a definitive answer to the proverbial universal question of our origins and our ultimate destinations, through the use of calligraphic lines, eventually building up to a thick, textured surface as well paint applied with a variety of spatulas, palette knives, rollers, misshapen old brushes and her hands, Shaver’s art invites viewers to ponder such questions for themselves. 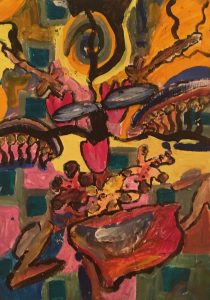 Allison Lewis demonstrates high levels of expressionism in her art influenced by her incredible life experiences. Being a philanthropic individual, Lewis has crafted art in New Brunswick for those who are homeless, as well as for those who are mentally ill. She does this out of the kindness of her heart and for the love of art. Her art is demonstrated in many different forms, by being displayed not only to loved ones, but to therapy groups and in art classes. The expressions in her drawings have a massive variety: they can express any topic, whether it be cancer, love, or anger. Her inclusiveness of individuals is incredible….. Allison is additionally passionate about showcasing her art to handicapped individuals. Her kindheartedness puts a much heavier meaning into her paintings.

About the Exhibition Every year, Alfa Art Gallery hosts a series of New Brunswick Art…