In order to be able to fully comprehend and analyze Mr. Kourtev’s paintings we need to know about his past. Where he comes from and what traditions and values govern his life. He was born in Bulgaria, an ancient country with a very rich cultural-historical heritage – from the fascinating gold work of the Thracians through the unique Roman architecture to the Byzantine mosaics and paintings.

I have know Vesselin Kourtev since he was a student and as his teacher I know how thoroughly and responsibly he was accumulating knowledge, learning the subtleties of the profession, preparing for his independent art work. After his graduation he showed enviable activity which is reflected by his lengthy portfolio. 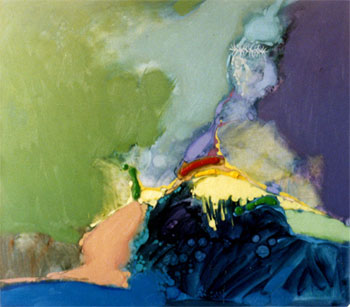 The exhibition presented in front of you is that of a mature author with his own individuality. The subject-matter which intrigues him most is human relationships and interaction in their global and personal dimensions. The events take place in a rather abstract, almost fictional environment. The message is conveyed by the state of the figures and their faces, reinforced with reserved gestures and movements. Vesselin’s strength as a painter is in his talent as an artist – every one of his ideas is supported by a wonderful choice of color, vital and alive, throughout the whole color spectrum. In most cases the faces are unobtrusive, showing through the background like sheer contours, weaving into the whole semi-aquarelle pulsation of the painting.

A lot more can be said about V. Kourtev’s creative work but it is more important that the appreciators themselves, live the moment for themselves and I hope they find the painting that is closest to their heart and environment.

I strongly believe that the prestigious Agoura Gallery has made an excellent choice by inviting an authentic and gifted author such as Mr. Kourtev. I wish the gallery and the author mutual success and successful collaboration.

Green Wave – “The Fish Are Praying For Rain” Cycle 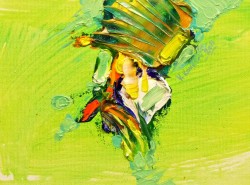 Vesselin Kourtev, is an internationally acclaimed artist who paints bright and provocative works that have been exhibited in New York, Berlin, Antwerp, Geneva and Prague. He was born in Bulgaria, an ancient country with a rich artistic and cultural heritage. You can see these influences throughout his works as he inventively manipulates oils, water colors and mixed media to effectively communicate subtle, sensitive and sometimes humorous messages.

Vesselin Kourtev uses the transparent qualities of oils, textured watercolors and whimsical collages to create compositions filled with mysterious associations that are allegorical and whimsical. He uses light and pastel tones to saturate each work as he creates abstract, dreamlike backgrounds that allow carefully drawn figures to stand out in sharp, detailed contrast.

Vesselin Kourtev has over 20 years of experience as a professional fine art artist. He graduated from Faculty of Fine Art at the University of Veliko Turnovo, Bulgaria. From 1989 until 2002 he worked in Art School of Scenography, Plovdiv and took part in the artistic life of Bulgaria. Participated in numerous one-man shows and international exhibitions. He came to America in 2001 and decided to settle in New Brunswick with his family. He chose to open his gallery here because of its excellent location amidst academic, theatrical, business and social settings, similar to locations in his native Bulgaria. 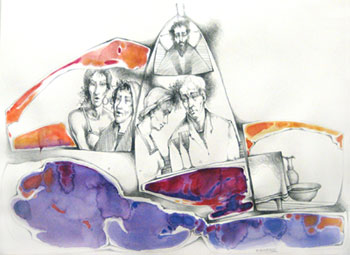 Born and raised in Bulgaria, Vesselin Kourtev received his high school degree in fine art from the Fine Art School, Kazanluk and MFA degree from the Faculty of Fine Art at the University of Veliko Turnovo, Bulgaria.

From 1989 to 2002 he worked in National School Of Stage And Film Design, Plovdiv, Bulgaria.

From 1975 until 2002 and actively participated in the artistic life in Stara Zagora,  Kazanluk and Plovdiv, Bulgaria and large number of national and international exhibitions and competitions

In 2002 he moved to the United States and in 2006 he opened Alfa Art Gallery in New Brunswick, New Jersey. Here he continues to help promote young artists by helping them gain recognition in their community and abroad. Every year he teaches “History of Art” at the International Art Lab in New Brunswick. Vesselin Kourtev’s work is part of 34 independent and 15 collective exhibitions in Bulgaria, USA, Czech Republic, Greece, the Netherlands, Belgium,Germany and elsewhere. His works are owned by many galleries and private collections in countries including Bulgaria, Germany, France, USA, Malta, Greece, Belgium, the Netherlands,Switzerland, Turkey, and others.

From 2008, Vesselin Kourtev is the Art Director and Resident Artist of the Alfa Art Gallery.

Currently, he is working on oil and water color paintings and collages. 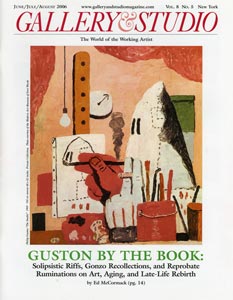 At first glance, the paintings of Vesselin Kourtev, a Bulgarian-born artist now living in New Jersey who has steadily gained a reputation for his exhibitions in Malta, Germany, Greece, the Netherlands, Belgium and the U.S., suggest a postmod ern offspring of the great British landscape painter Joseph Mallord William Turner. For like that great British landscape painter, Kourtev’s light-kissed oils on canvas appear as though painted with “tinted steam,” to use Turner’s own phrase.

One was also tempted to make compar isons to the Scottish “skyscapes” of the late James Schuyler, given that most of the can vases in Kourtev’s recent exhibition at Agora Gallery, 530 West 25th street, evoked low-lying horizons and land masses topped by magnificent cloud masses. Then, on closer inspection of the paintings, mysterious fig ures began to emerge from those luminous cumulous fool-the-eye shapes in the sky.

And suddenly one realized that Vesselin Kourtev is a unique neo-symbolist in abstract disguise, a romantic in the tradition of artists such as Arnold Bocklin, who envi sioned the forces of war massing in the sky over Dusseldorf, or the Pre-Raphaelite painter Walter Crane, best known for his fanciful merger of myth and seascape “The Horses of Neptune.”

A significant difference between Kourtev and these earlier artists, however, is that Kourtev’s style is informed by the gestural freedom of Abstract Expressionism, mak ing his synthesis of figure and pure form appear more subtle and organic. Rather than being obvious imaginative anomalies, grafted onto nature for symbolic effect, they inhabit the scene as comfortably as the clouds themselves, growing out of a seamlessly unified aesthetic vision, in which no element appears less real or convincing than any other. 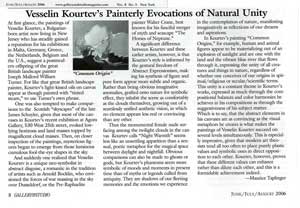 Thus the monumental female nude sur facing among the twilight clouds in the can vas Kourtev calls “Night Warmth” seems less like an unsettling apparition than a sen sual, poetic metaphor for the magical space between daylight and nightfall. Obvious comparisons can also be made to ghosts or gods, but Kourtev’s phantoms seem more symbolic of moods and moments in present time than of myths or legends culled from antiquity. They are shadows of our fleeting memories and the emotions we experience in the contemplation of nature, manifesting imaginatively as reflections of our dreams and aspirations.

In Kourtev’s painting “Common Origins,” for example, human and animal figures appear to be materializing out of an explosion of sunlight and are one with the land and the vibrant blue river that flows through it, expressing the unity of all creatures and things in nature, regardless of whether one conceives of our origins in spiritual/religious or secular/scientific terms. This unity is a constant theme in Kourtev’s works, expressed as much through the com positional balances and color harmonies he achieves in his compositions as through the suggestiveness of his subject matter. Which is to say, that the abstract elements in his canvases are as convincing as the visual metaphors he creates is what makes the paintings of Vesselin Kourtev succeed on several levels simultaneously. This is especially impressive, given that modern art theorists tend all too often to place purely plastic values and symbolic ones in direct opposition to each other. Kourtev, however, proves that these different values can enhance rather than dilute each other, and this is a formidable achievement indeed. 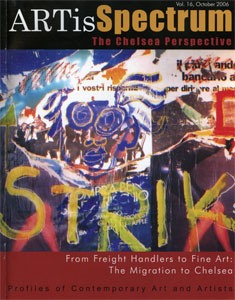 Through rich oils and textured watercolors, Vesselin Kourtev paints compositions ripe with associations of both allegory and mysticism. His works are suffused with light and pastels; his colors saturate the entirety of each work. Kourtev’s abstract, ethereal backgrounds allow the faces of his carefully drawn figures to stand out in sharp, detailed contrast. Kourtev, however, does not limit the emotional content of his paintings to a one-dimensional idea. Though his body of work has a distinct and repeating style, each painting tells the viewer a different story and shares a different idea. Kourtev’s ideas are not only about the mechanics of art (though he makes a lot of creative statements on the subject) but are also about the past, present and future of our hu man memory and psyche.

“A Tale of Sheherazad” gives a modern vantage point to the tale about the murderous king who intends to kill his bride on their wedding night. Sheherazad saves her life by telling him a tale that lasts a thousand and one nights, thereby winning his heart. Though Kourtev uses watercolor and pencil in this work, he creates the illusion of a collage loosely held together. Each character in the story occupies a different section of the collage, disconnected from the other. This truncation creates a mood of isolation and strange loneliness within the painting. The King and Sheherazad eye each other from their separate patches of color, illustrating the tenuous nature of their relationship before Sheherazade has won back her life. 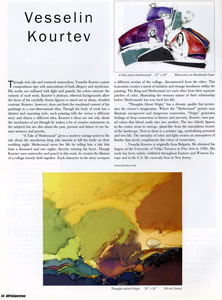 “Thoughts About Origin” has a dreamy quality that perme ates the viewer’s imagination. Where the “Sheherazad” picture may illustrate unexpected and dangerous connection, “Origin” generates feelings of deep connection to history and ancestry. Kourtev uses pas tel colors that blend easily into one another. The two elderly figures in the center seem to emerge, ghost-like from the amorphous beauty of the landscape. Next to them is a pristine egg, symbolizing potential and new life. The interplay of color and light creates an atmosphere of fluidity that nicely compliments this vision of connection.

Vesselin Kourtev is originally from Bulgaria. He obtained his degree at the University of Veliko Turnovo in Fine Arts in 1985. His work has been widely exhibited throughout Eastern and Western Eu rope and in the U.S. He currently lives in New Jersey.

Fish Out of Water; or, The First Verse of the Poem
– After V. Kourtev

It only takes a word or two
To bring the sun fish nosing in,
So I take me to the river
To babble about some too.

At the farthest edge of autumn,
My mother stands a quiet watch—There,
Just before this stretch of fractured light
All finally recalls itself again

Into some silent and solitary
White, trimmed and burning from its immeasurable frame.
It is an odd wind that has worried
Her crown into the current:  Borders

Spilling out into their borders.
So it is, it seems, with things:
Whatever has will want.
Whoever is without a house

Will break themselves to build one.
First verses ache with seconds,
Thirds and fourths, fifths;
The whole harmonic spectrum

Of all there is already
There is yet more beneath.
The smallmouths weave, and pray
Their whispered fishtongue prayers for rain.