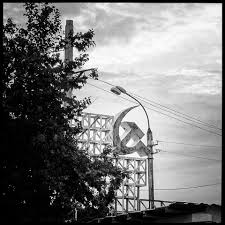 Undine Groeger is an interdisciplinary artist who spent the first ten years of her life in the German Democratic Republic. Drawing from this experience, she works with communities to inspire dialog, catalyze social change, and foster individual and collective healing. Groeger’s background, living in the aftermath of the fall of the Iron Curtain, first led her to humanitarian work. From 2003-2013 through partnerships with non-profits and government agencies such as Doctors Without Borders and the United Nations—she engaged in rigorous social activism, such as constructing a prison clinic, implementing sanitation standards for a field hospital, addressing human trafficking, and investigating torture.

On a humanitarian mission to Transnistria, Groeger was reminded of her childhood home in former East Berlin, and she began using her camera as a means of self-examination. She started to see visual storytelling as a tool to engage the public to effect real change, and she expanded her activism into an art practice. In 2014, through the support of myriad private and public institutions, she founded Within Our Walls and Beyond (WOWB), which includes her traveling photography exhibition, community events, and a growing archive of testimonials. In 2017, after years of working as a self-taught photographer, Groeger returned to school to study in the New Media Narrative program at the International Center of Photography. There she expanded her community and created Walls; Within and With(Out), the multimedia documentary project featured in the group show Signal Crossings. Groeger has lived and worked on three continents and is currently based in New York City.

My work is about connecting the space between what was, what is, and what will be. I belong to Germany’s Third (and last) Generation East who experienced life in the Soviet zone of a divided country. Born and raised in former East Berlin, it wasn’t until the day the Berlin Wall fell that I knew it existed. I was 10 years old. What is your memory of the BerlinWall? I’ve experienced many changes to my identity as an East German, German woman. I witnessed the rise of intangible walls and came to understand how my dreams and perceptions of spaces and places are influenced by my identity. I tell my story through a photographic journey that begins in a place that reminds me of my childhood home. While unknown to many, Transnistria is considered by some as the break-away Republic of Moldova.

It remains an unrecognized state and post-Soviet “frozen conflict” zone situated between Moldova and Ukraine. It was there about 13 years ago that I began using my camera to document a place that evoked memories of my life informer East Germany. Ironically, a place that I was discovering for the first time felt familiar and helped me to reconcile lingering questions I had about my East German identity. My artwork attempts to broaden our understanding of identity and place, and their long-term impact on the individual and society. I also attempt to expose how trauma can be carried across generations and how it can be transformed to set us free. My photos are an expression of my own identity and aim to revive and preserve individual and collective memories. Living in Harlem, New York, today, I continue to ponder questions on identity, place, and our responsibility

A selection of photographs that belong to my traveling exhibition,
“Within My Walls and Beyond,” representing a world that no longer exists, but does in my memories.

“Our Nature”, a selection of my photographs that belong to a long-term project series about family, women’s health and breaking the walls that are imposed on us when diagnosed with an illness.

“Walls, Within and With(Out)”, a multimedia documentary healing project installation.

“Bear With Me”, 20 photos that were part of a slideshow featuring the work of all one year students.

The exhibition in 2015 was extended for 3 months.

supported by the Permanent Mission of Germany to the Office of the United Nations and other International Organisations.

African Colours – a travel into the heart of African culture

Life of Roma in Geneva

The work of the UN in Georgia