Sertan Talip‘s art education began in high school at Fiorello H. LaGuardia High School of Music & Art and Performing Arts. Continued education brought him to Middlesex County College where he studied Digital Media, Mason Gross School of the Arts at Rutgers University earning his BFA and Fashion Institute of Technology where he took on General Illustraion. Talip has been in several group shows since the start of his career in 2000. 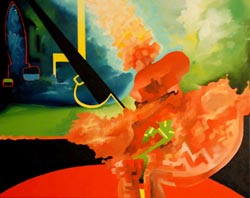 The sophistication of Sertan’s work exceeds the standard of most artists with the same experience.  His paintings are thought provoking and mysterious.  With titles directly tying in with the premise of the show like Floating Thought or Full Void, Talip’s paintings are a necessary addition to “Dream Things That Never Were”.  Surreal images and warped depictions of space bring to the surface viewers’ fears or uncertainties.  The emotional undertone of Talip’s works collectively is one to make you wonder and question the very ground you are standing on.