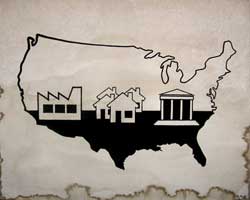 Robert Mermet was born on August 27, 1984 and grew up in a small town in New Jersey. At the age of six he was given permission from his parents to use the family camcorder in his artistic endeavors. Robert used this opportunity to force reluctant siblings into acting in his action packed, poorly scripted melodramas. At the age of eight, Robert decided to go beyond live action and teamed up with his buddy David Thomlison to create hundreds of short clay animations. This working relationship lasted until high school when Robert decided to return to live action and created several short horror films, experimental films, as well as music videos for local bands. After high school Robert attended Rutgers University, Mason Gross School of the Arts, where he received a BFA in visual arts with a concentration in film and video. While in college Robert was encouraged to explore different mediums and as a result he began to experiment with performance art, sound works, silk screening, and welding steel sculptures. In 2007 Robert started pursuing his long time passions of painting and photography more vigorously. He currently resides in Highland Park, NJ with significant other, painter, Kaitlin Deering. 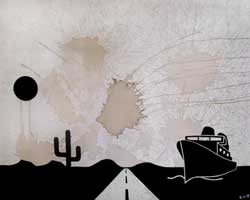 I am a great American Artist; I make work in order to convey this to others. I am interested and involved in experimental film, contemporary art, and music. These are the three pillars that make up my creative psyche. I like digital film, graphic design, and other forms of digital media because they allow for images, audio, and video to be duplicated, shared, and available for all. However, I have always been obsessed with creating physical objects; objects that exist outside of a computer but in the physical world. Whether it is a painting, sculpture, or any other form of precious object, I am intrigued with the notion of “one of a kind.” Precious objects allow for semimetal value and a feeling of love and warmth that are unlike the fleeting pleasure of hearing your favorite song or watching your favorite film. 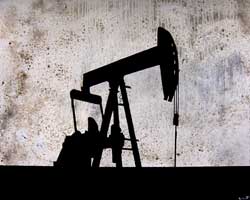 During the fall and winter of 2008 I created a series of paintings dealing with America’s tarnished reputation. These works use familiar imagery and techniques from commercial advertising to satirically depict the unfortunate realities of America and the events and mentalities that put us in this predicament. Although being hand painted, these paintings have the qualities of printed illustration. I don’t intend for the humor of these paintings to confuse the viewer in to thinking I am making light of our shared bleak circumstance. If anything I am only trying to put a better light on things. 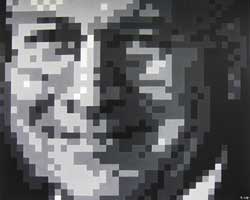