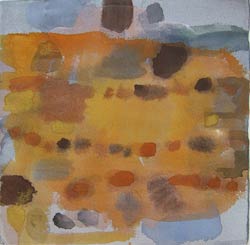 Robert Aitchison’s paintings and drawings explore the natural world, expressing the experience of nature through an investigation of its structure, details, and ephemeral characteristics. His creative process involves extensive layering and reordering of distilled, fragmented imagery informed by nature and natural phenomena. The synthesis of organic lines and diffused fields of vibrant color establish compositions which move beyond the depiction of specific locales and allude more to the act of seeing and contemplating the natural world. Aitchison was raised in Spring, Texas and studied painting at the University of Texas at Austin. His art has been exhibited in Texas, New York, Europe and South America and can be found in private collections in the United States, Europe, and South America. He currently lives and works in New York City.