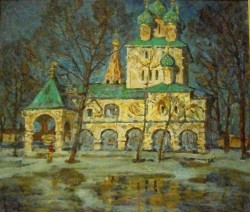 O. Vladimir Tolstoy was born in Yugoslavia. Only in 1945, his family returned to their homeland. From 1949 to 1953, the future artist studied at the Moscow Institute of Applied and Decorative Arts at the famous Alexander Deineka , then, until 1956, in the V. MGHI I.Surikova at Pavel Sokolov-Scalia . While a student was engaged in reconstruction of the famous Panorama A. «Defence of Sevastopol “(dedicated to the military events of 1855, to which was his great-grandfather), was one of the designers of Agricultural Exhibition (All-Union Agricultural Exhibition) and worked on the frieze for the station” Kiev “Moscow Metro. In 1957, Oleg Tolstoy for his film “The First Horse” was awarded the prize at the II International Exhibition in Moscow, dedicated to VI World Festival of Youth and Students. In the mid-1970s, the artist created a mosaic of “Space” to Severodvinsk. In 1985 he led a group of artists on a trip to Lake Baikal, the results of which created a series of paintings. In 1980 Oleg Tolstoy worked on landscapes in Yasnaya Polyana, Academic dacha outside Vishny Volochok in other parts of Russia Tolstoy. The first solo exhibition was held in 1985.