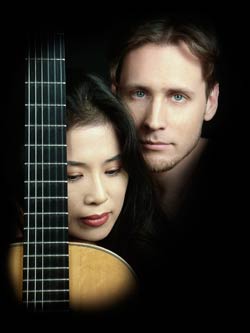 A musician of numerous passions, J. Andrew Dickenson is a performer, teacher, composer, conductor, administrator, writer, and arranger who has been showcased in a variety of prestigious locations around the world. Founder of the Midnight Moon Ensemble with soprano Yeonjune Suh, Andrew has performed in some of the most celebrated venues in the United States (Carnegie Hall), Korea (KNUA Hall), and England (Penzance Guitar Festival). Now a dedicated teacher himself, Andrew is an Assistant Professor at Cecil College and former String Department Head at Concordia Conservatory. He is the author of the acclaimed Guitar Fundamentals series and has been published internationally in Soundboard and Classical Guitar. Andrew is also editor of NYlon Review, the newsletter of the New York City Classical Guitar Society, where he was President and Artistic Director for 4 years.

Soprano June Suh began her voice studies in her native city of Seoul, Korea. Following graduation from the prestigious Sunwha Art Middle and High School, she was awarded a scholarship to the Chicago College of Music of Roosevelt University where she studied with Carmen Mehta. Following her dream to study in Italy, she was then accepted to the esteemed Conservatorio Giuseppe Verdi in Milano. Upon graduation she was invited to participate in the Conservatorio’s selective Post-Graduate teaching program. June has appeared in concerts and opera productions throughout the Italian cities of Milano, Bergamo, Bari, Tocco dei Casauria and Taranto, Sicilia, and recently graduated from Mannes The New School for Music in New York City, where she was accepted into the Opera Program.