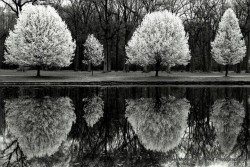 Michael F. McKenna is a self-taught photographer and a New Jersey native who currently resides in Scotch Plains. His photographs capture scenes of his home state and give the viewer a sense of the variety of neighborhoods and areas that can be found in NJ. McKenna usually photographs in black and white and prints his images on metallic paper. He has been shown in both solo and group exhibitions and has won awards in juried exhibitions for his excellent photographs. His work is featured in many private collections throughout New Jersey and the United States. Recently, he was awarded with the title “Artist of the Month” from Jerseyarts.com. He is inspired by other photographers who shoot landscapes, such as Brett and Edward Weston, Ansel Adams, and Art Wolf. Through his photography, McKenna takes beautiful environments or moments in time that could be potentially overlooked and brings them to the viewer’s attention. Stark black silhouettes and a strong emphasis on pleasing compositions are very present in his work. His black and white photographs have a sense of mystery to them. Though he predominantly works in black and white, McKenna does photograph in color as well.