The calligraphic lines in the paintings are made with an attitude of free association, often in response to music. The marks seem decipherable but are finally elusive, an experience comparable to what one may have when traveling in a foreign country, feeling as if one could read the language but ultimately only understanding it as a picture or decorative line. That the mark is made within the confines of ruled lines increases its resemblance to text and language. The work also makes reference to gestural painting—the gestural mark in these paintings is reiterated, and sometimes canceled, by tracing it or painting the negative space around it. This slow and considered method of presenting the initially spontaneous mark is a meditation on the art-making process.

In the drawings, marks are made on both sides of translucent synthetic paper. Colored pencil is used to measure space and restrain the mark. The lines that are drawn with brush and ink are, in places, presented from the reverse side of the paper or scraped with an xacto knife—further means for reconsidering the intuitive gesture.

Marsha Goldberg was born in Boston, MA. She attended Boston University’s School of Fine Arts, from which she received a BFA in Painting. The program at BU was a traditional one, with an emphasis on working from the figure, still-life, and landscape. For several years following, Goldberg lived and worked in Boston, exhibiting in galleries and institutions that included the DeCordova Museum and the Boston Public Library. She was a founding member of the Brickbottom Artists Building in Somerville, MA, one of the country’s largest live/work studio buildings. Following moves to Tucson, AZ, and Rehovot, Israel, she came to NJ and has been living in the New Brunswick area, with her husband and two daughters, since 1997.

Working primarily in oil on canvas, Marsha Goldberg continually uses drawing as a way to develop new imagery. Printmaking techniques, including monotype and woodblock, are also an integral part of her studio work. 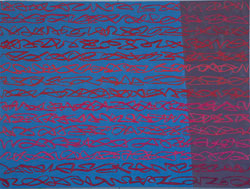 She has exhibited extensively in New Jersey, most recently as part of the Mary H. Dana Women Artists Series at Rutgers’s Douglass Library Galleries. One reviewer referred to the work in this exhibit as “artwork in which the viewer is rewarded by continued looking.”

Marsha Goldberg’s work is in the collections of the Fogg Art Museum at Harvard University, the Boston Public Library, and Wheaton College, Norton, MA, among others.