Lisa Pressman received her BA in Fine Arts from Rutgers University and her MFA in Painting from Bard College. She describes her artwork as being rooted in a sense of discovery and a passion for revealing the unknown. She interested in motion, energy, and balance- both formally and metaphorically. Her paintings evoke a sense of time and memory through the process of layering and scraping her materials. Lisa has been a guest lecturer several time, and was published in both Encaustic Works 2012 and Park Place Magazine. She has been exhibited in many group and solo show. 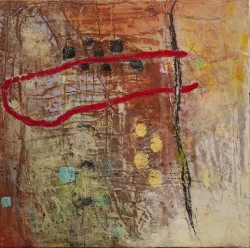 My work is rooted in play, a sense of discovery and a passion for revealing the unknown. Images emerge from my translation of experiences of the outside world, and are internalized through the lens of the inner eye. I am interested in motion, energy and balance both formally and metaphorically.The paintings develop through an intuitive dialog between deliberate and random marks, allowing a relationship between intent and accident to unfold. Time and memory are evoked through the process of layering and scraping. The working process is inseparable from the completed image, which stands as a witness to the history of its making. 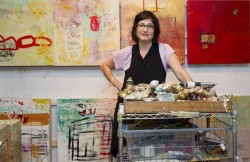 Lisa Pressman’s paintings incorporate oils, collage, wax and other mixed media to create works that allude to a personalized time and space. The work is the physical embodiment of the slow and gradual process of realization and transformation. 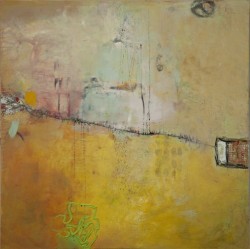 Recently, Pressman’s work was exhibited in Making the Mark at Susan Eley Fine Art and at the Affordable Art Fair with Anelle Gandelman Fine Art, both in New York City. Her paintings were also featured in The Balancing Act, a solo show at Rosenfeld Gallery in Philadelphia. One of her paintings was recently selected for the Viridian Gallery Annual Juried Show 2011, curated by Elizabeth Sussman from the Whitney Museum. Other recent exhibitions include: Reality and Artifice, the 2010 New Jersey Annual at the NJ State Museum, Trenton, NJ; Illusive Balance: Transcendental Pattern and Layered Surface at the Douglass Library gallery, New Brunswick, NJ; Little Gems at Butters Gallery, Portland, OR. She is represented by the Jack Meier Gallery, Houston TX, Anelle Gandelman Fine Art, Larchmont NY, and the Allyn Gallup Gallery in Sarasota, FL.

She is currently an adjunct at the Art Institute of New York and teaches painting privately and around the country.