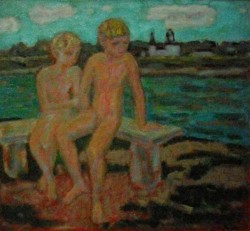 The Artist about himself – ABOUT MYSELF AND MY PAINTINGS
I belong to those who are called “the generation of the sixties”. Our childhood passed amidst the lightning’s of World War II and the youth — in the post-Stalin political “frosts” and “thaws”. I was born in 1931 in the city of Vologda, brought up by father and by the streets. My basic educators, however, were books. As a boy, I earned some money by making drawing copies of soldiers’ photographs, of TASS Windows (photo reports by Telegraph Agency of the Soviet Union displayed in the streets), of posters.

Love for art was aroused in me by my elder brother Vyacheslav, who had gifts for music, painting, and engineering. His death on the front was a heavy trauma for me, and I always remember what he told me to set me right. After leaving school, I tried to enter the Moscow Cinema Institute, but its lecturers refused to believe that the drawings which I brought there were my works. I spend long time in searching for my path — graduated from two institutes, completed two post-graduated courses (in history and in art criticism), worked as a historian, art critic and philosopher until turned at last, in 1976, to 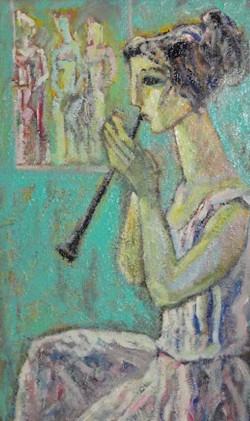 painting. That was my choice for the rest of my life. I was known as a critic and expert in arts, so other people refused, for some time, to see a painter in me. I love colour and energy of painting, power of big form, so close to me are the early 20th century Russian and French avant-garde and, of course, our great icon-painting.

I started with painting from the life —landscape and still life. Soon, I got tired of this and switched to “speculative” painting, with a “presence” effect contained in my inventive reality. Painting is helpful — it allows a painter to make our existence problems visible, to perceive space and time through eyes and hands: for this, he has a broad selection of expression means and a large variety of tools to choose from. A canvas challenges me, and I make use of all the means to “win a victory” — from “tousled” brushes and knives to my fingers and rags. Everything is put in action, and just, one small thing remains — to conquer spectators, to achieve this only by plastic, not allowing attention to be diverted by the trifles on the subject. I find the nee

ded plastic in still life, in my theatre of object. My tables are stage grounds for the objects connected by relationship, friendship of by some conflict ties. My objects come from the arsenals of art, old and new ones and I try to give a new, modern symbolic appearance to them, such as new “masks” of bouquets, vessels, utensils, or cabinet sculpture. That is how I compose still life “parades” and processions of the objects — the silent, miraculous personages whose roles and meanings are designed by me. To provide an entrance into the outer world, I often combine still life with landscape or interior. Most important for me is to find a psychological and, therefore, an artistic transformation of the objects, whatever they are — “bouquets” made up of spoons, or tools, “sullen” or “merry” kettles, “respectable” or “open-hearted” vases, “prim” or “one of us” tables. Seeing the composition as value in itself, I try to convert an idea into a painting only once and not to make its variants.

By the way, set expressions of theatre producers and their memories helped me much in this. While a canvas is in the studio, I continuously edit it, remove painting slips, and often repaint it. I work without sketches of draft pictures, since in this case the process of painting is more perceptible. The fact that my paintings started to arouse interest of my colleagues-artists and art experts makes me to feel even more responsible. Anyhow, painting for me is joy and sorrow, doubts and discoveries which, I hope, are of some benefit also to others.