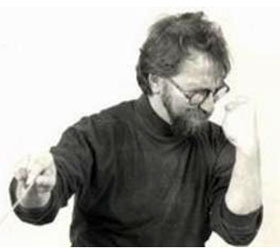 Kiril Tarpov … “An exceptionally successful debut…”, “A Sunlight beam breaks through the gray skies of the capital’s concert season…” These are just some of the media reviews after Kiril Tarpov’s debut as a conductor and director with the performance of Stravinsky’s “A Soldier’s Tale” in 1981 in Bulgaria.

Not long after his debut as orchestral conductor in 1981 Kiril Tarpov produced his first festival, “100 Years Igor Stravinsky”. What followed were years of concerts and festivals throughout Europe and, of course, Bulgaria. In 1994, together with one of the most prominent members of the Bulgarian musical society, he established the Jeunesse Musical Foundation, and conducted its youth orchestra until 2002. He spearheaded the start-up of some of the most distinguished chamber orchestras for the period 1981 – 1995, including Collegium for XXth Century Chamber Art, Collegium Musicum Plovdiv, Plovdiv Youth Chamber Orchestra, Jeunesse Musicale Chamber Orchestra, and others. Kiril Tarpov was the first to conduct the premiere performances of a long list of works by Bulgarian composers, as well as the Bulgarian premieres of many XX century classics.

Since 1999 Tarpov lives and works in New York. In collaboration with several US foundations he conducts cultural exchange programs between Bulgaria and the United States. In 2001, with a sponsorship by JP Morgan Chase, Tarpov became a member of ACDA and realized his idea for a Bulgarian-American art forum “Festival of Light”, where choirs from different US states perform in Bulgaria. Since 2003 Tarpov has been organizing the “Bulgarian Seasons in New York” festival.

The festival offers an opportunity for American artists and everyone else, to meet new friends, participate in the cultural life of the Bulgarian community, and share its gifts and charms. Above all, this event paves the way to experiencing the spirit of the Bulgarian people — a spirit of tolerance, peace, perseverance, respect — despite the geographical distance between Bulgaria and the USA.

The festival also advocates for the peaceful coexistence of diverse people, who believe in the existence of common grounds for conversations and dialogue through art and music. It also seeks to embody its mission in all of its events and activities, and further strengthen relationships and respect among individuals from all spheres of life.