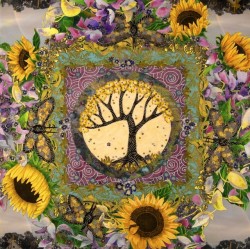 Kat Block graduated Summa Cum Laude from Kean University with a degree in English Literature and Creative Writing.  She then attended the Visual Art Center of New Jersey and the DuCret School of Art.  After attending the Visual Art Center of New Jersey, she began selling her artwork and was invited to join the faculty there.  Later, she began teaching at the DuCret School of Art, which she had attended herself, and continues to teach there today.  Not only does she create and teach art, she is the published illustrator of a children’s book, “Little Mouse.” She has designed posters for the Union County Jazzfests and she has taught workshops and juried shows.  Her work was featured in the 2010 release, “Remember Me,” and she has been the recipient of numerous awards throughout the New Jersey region.  Block’s complex, mixed media collages primarily focus on nature and brilliantly integrate various papers, watercolors, photography, and graphite.