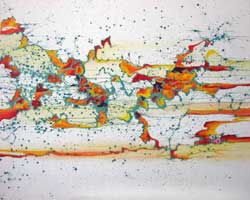 Kaitlin Deering was born in March of 1985 in Tulsa, Oklahoma. She lived in Oklahoma for twelve years with her parents and three younger sisters. At age twelve her family moved to Indianapolis, Indiana where they would live for four years, and then Chatham, Illinois for the following two years. In July of 2001 she relocated to New Jersey and has lived there ever since. She is currently residing in Highland Park. She has studied painting under Melvin Leipzig, Mark Stockton, and Cindy-Stockton-Moore. She has been painting since 2004. 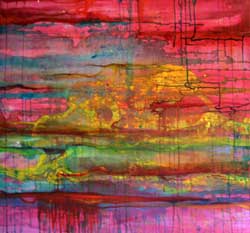 I have been mostly influenced by elements in nature such as tornados, major storm systems, climate, and environmental fluctuations. I am interested in the natural breakdown of matter and the cycle of birth and death. I believe my childhood in the southwest has greatly influenced my work. The growing tension before a storm, the utter fear, fascination, and sheer beauty in the midst of the storm, and the calm quiet of the aftermath are all elements that I try to capture in my paintings. 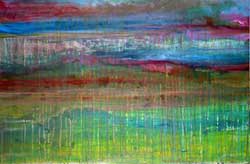 I rarely ever plan a painting out prior to starting it. My paintings evolve as i stand before them. I am most comfortable working in a fluid state. I am interested in the interaction between the painting and the viewer. Each individual has a unique interpretation of my work. I prefer to leave my paintings open ended. I reference elements in nature without using objects directly from the tangible world. I want to provide an alternate reality that the viewer can escape to if only for a moment. I want to make work that influences a specific emotional reaction from the viewer. I want that reaction to occur from the gut. My goal is to make work that translates inner spiritual vision. 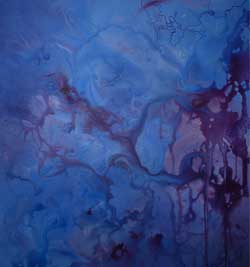