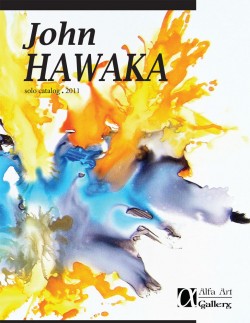 Officially represented by Alfa Art Gallery since 2008, John Hawaka has brought to New Brunswick a wealth of creativity and skill. As one of the few artists to use lacquer in painting, his work is more impressive and rare to see. Hawaka attended Phoenix School of Design in New York and Montclair State University in New Jersey. He has also contributed his work to foundations and private collectors in New Brunswick, Princeton, Piscataway and surrounding areas, making him a local treasure.

He was selected as one of 119 out of a field of 2,700 artists for a national competition juried by Holly Solomon Galleries, New York, N.Y. and was featured in New Jersey Living monthly magazine.

John was commissioned for a 140-foot wall design for JFK Medical Center in Edison, N.J.

Carrying the trademark of his works created with lacquer, these paintings in his second nature series are graceful yet explosive. While some pieces give the impression of colorful ink beautifully suspended in water, ever so slowly expanding outwardly on the white board Hawaka uses, others splatter dynamically into natural forms with force. Regardless of the way the lacquer imprints the board, Hawaka’s colors are captivating and optimistic, never in any inch of the work dull, with the white spaces delightfully acting as light. Overall, Hawaka’s abstraction of the spirit of nature creates a beautiful and long-lasting impression of the sublime.

John Hawaka is one of those rare artists who uses lacquer as a medium. He lives and works in North Brunswick, New Jersey.

John Hawaka has received numerous awards in group and one-man juried shows throughout New Jersey, New York, and Pennsylvania. He received the top award for “Nature in Abstraction,” from Black Diamond Arts Council, Lackawanna County, Pennsylvania. He is also a member of Trenton Artists Workshop Association.

When asked to give a statement about his paintings, his response is:

“My work should speak for itself-good, bad or indifferent; that’s why they make vanilla, chocolate and strawberry. Life would be very boring if everyone had the same taste.

Not to be unappreciative, but I cringe when someone says: “Your painting is ‘nice'”. A “nice” painting does not offend nor does it stimulate. I don’t paint to match the colors of your couch or your rug or your drapes–I paint to stimulate. Like my work or not, I hope that the viewer walks away stimulated.”

John Hawaka is one of the few artists in North America using a rare lacquer painting technique. To learn more about the technique please visit the links below:

When the gallery that represented me closed, I was relegated to exhibiting at weekend outdoor shows throughout the state. An article in the Home News Tribune told about a newly opened gallery—Alfa Art Gallery in New Brunswick that was seeking artists. I showed the gallery owners, Vesselin and Galina Kourtev, my portfolio. They have been showing and selling my work for the past seven years.

As for my work, I am not out to make any kind of social statement. I paint for the sheer enjoyment of doing so. I love the challenge. To be in my studio, brush in hand, facing a blank “canvas,” ready to make that first stroke—like the conductor of an orchestra, the music begins when he lowers his baton. Over the years I have experimented with many mediums and techniques—from casein to oil to acrylic and from wood to canvas to laminate.

Currently I am using a mixture of lacquer and several other mediums on laminate. I use the lacquer mixture for its fluidity and the laminate for its smooth surface, which allows the paint to flow freely. Often times I just watch as the painting presents itself— I’m the audience watching the “orchestra” play. 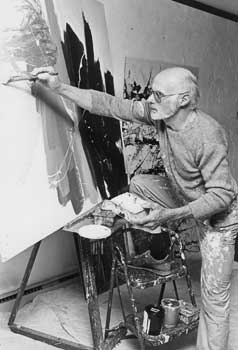 Abstraction can be viewed as a form of visual art that lets the viewer enter a small journey of exploration. It is the artist who creates such form on a surface and gives it a piece of self. Artist John Hawaka is familiar with such matter as he paints in his own unique style. Aside from creating a vibrant painting, it is his particular technique and style that bring him to the forefront of contemporary art. There aren’t many artists who can capture and freeze a moment on a surface to bring out the beauty of color and form. His style can be compared to the New York artist Anthony Vitti, who creates similar expressions of color but on a much larger scale. Hawaka’s paintings reveal a subtle yet striking force of contrast and color. Unlike Vitti, who creates most of his work using his whole body, Hawaka sticks to the traditional way of painting, using just his hands and mind. The most important aspect of abstract art is putting oneself into the artwork. It is the artist’s unique style that ultimately creates the most interesting and delightful works of art. John Hawaka has certainly reached the pinnacle of establishing his mark and using it to construct a form of self-expression that catches the eye.

How did you start painting?

I was teaching at the Kilmer Job Corps Center in Edison, and one weekend we were snowbound. I happened to be alone in the Arts building at the time, and there was nothing to do but wait out the storm. To occupy my time I glued some burlap to a piece of cardboard, picked up a brush and started to paint (realistic outdoor scenes). I painted four “pictures” that day. They were very amateurish, but I sold three of them at their first showing; the fourth one is hanging in my home.

What are the freedoms of working with lacquer?

I like the end result. The medium has a “mind” of its own, and I am happy when it agrees with me.

In the beginning, I used acrylic because it was cheaper than oil and it dried faster. At that time my wife and I had a new baby and we were building our house, so money was tight. I switched from acrylics in the tube to acrylic house paint in the gallon. (Willem de Kooning, Jackson Pollack and other prominent artists used house paint as their medium.)

One evening, I was dissatisfied with a painting. I took it outside, laid it on the ground, hosed it down and went to bed. The next morning, expecting to toss the watered-down painting in the trash, I was astonished by what I saw — the water had “painted” what I was unable to accomplish.

I tried to duplicate the water method in my studio, but the water did not evaporate fast enough for me. I experimented with several solvents to use in place of water, but they either didn’t perform or curdled my paint into something resembling spoiled yogurt. I continued to experiment with various mediums and was happy with the results I got from lacquer.

For some reason, I like to paint LARGE, from 4’ x 4’ to 4’ x 8’. I prefer to paint vertically rather than horizontally. I feel that my vertical paintings have “more to say,” but they have one disadvantage: Because I paint large, most art buyers don’t have the wall space to accommodate a vertical painting. Most art buyers want a horizontal painting that will fit over their living room sofa.

Your favorite subjects, ideas, visions are based on what?

When starting a painting, I have no particular idea in mind. I apply a color and go from there. I have no subject — it’s a matter of color and design and sometimes it works, sometimes it doesn’t. It’s not like building a house. I have no floor plans — just a gut feeling, if you will. Some paintings go quickly, while others take more time. Once I was asked: “How long did it take you to do this painting?” My reply: “All my life.”

Music is important when I paint. I like jazz, but I mostly listen to classical. My favorite composers are Beethoven, Sibelius and Shostakovich.

If asked what gave me the inspiration to paint that picture, I would answer: my life’s experiences, i.e., a violent thunderstorm, a piece of music, the reflection of the sky in a rain puddle, the pattern of food on a plate, the memory of a happy (or sad) event, etc.

Authors who stare at a blank sheet of paper for hours or even days are said to have writer’s block. I’ve never had “painter’s block” standing before a blank canvas. Once I apply that first stroke of color I’m ready to go.

Can you describe the painting of your dreams?

Yes. It would be very large — It would fill a two-story wall in a room at the Getty Museum in Los Angeles. I wish they would commission me to do a painting that would fill up that wall. I seem to recall that the walls of the room were painted in forest green. My painting would be an “under-the-sea” scene with bubbles rising to the ceiling, and there would be multi-colored formations resembling coral and anemone and other sea plants and creatures. The colors would become lighter as they neared the “surface.”