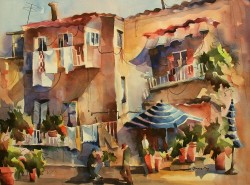 Jinnie May has always had an appreciation for art, but it wasn’t until she retired in 2000 that she began to seriously pursue art. Currently Jinnie is interested in the use of watercolor for its spontaneity, portability, and indecisiveness. Her initial inspiration comes from studying California Watercolor artists from the 1940’s and 50’s, who painted genre paintings on large paper using big brushes and bold colors. From her holidays spent traveling around the United States and Europe, she has acquired a taste for a wide range of subject matter from city and seascapes, to architecture. In her paintings, she tries to give life to old buildings in a city and urban scene. Jinnie attributes her distinct style to being slightly askew, both in sight and insight.

Her deliberate disregard of perspective in her buildings adds a touch of her personality and gives the buildings a whimsical feel. 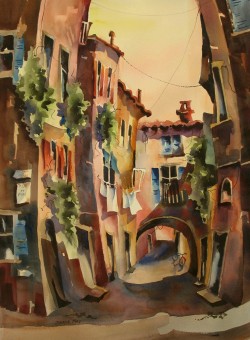 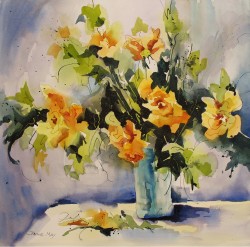 Jinnie May, Just Because…

The Pat and Richard Morgan Award-GSWS-October 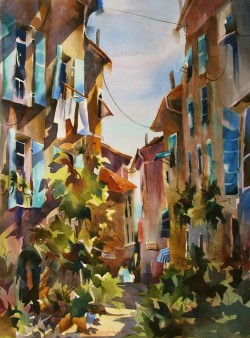