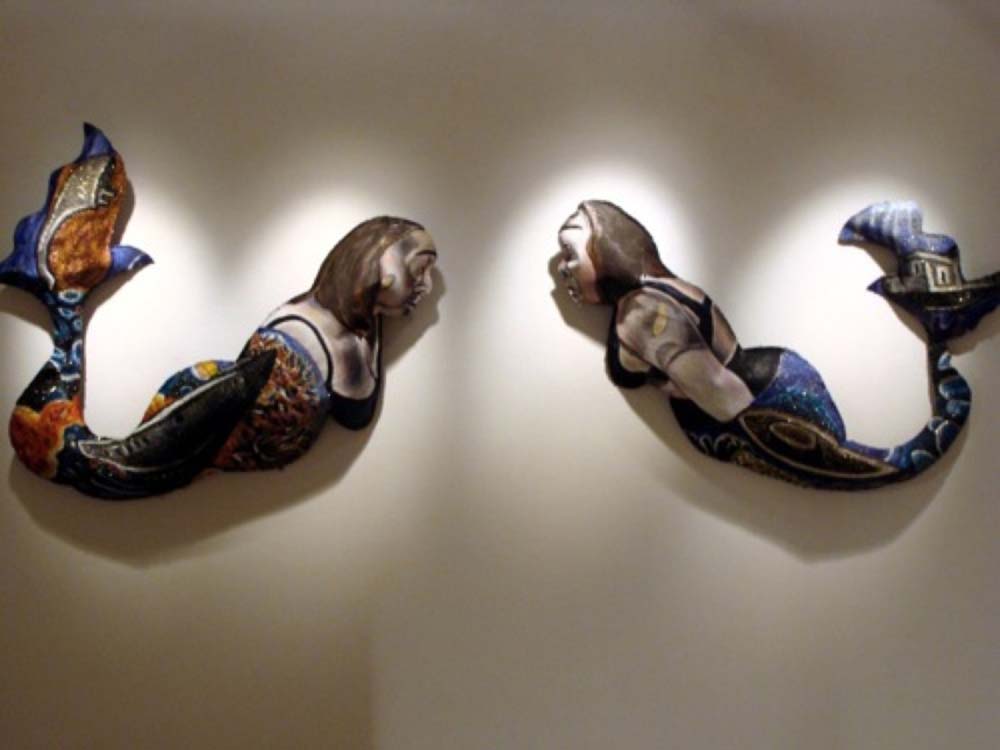 Jane Zweibel works on a variety of mediums, from canvas and paper, to her unique “sewn and stuffed” paintings that border on sculpture. Her current series, “Midlife Mermaids,” is at once a highly personal series of works – with Zweibel using her own face for the mermaid figures she paints – and at the same time a series that addresses more general themes of gender and identity: “My ‘Midlife Mermaids’ are, at once, portraits of a woman artist and individual, and of mythical sirens capable of luring and captivating men.  They are simultaneously personal feminine icons, and images emanating from a collective female (and male) imagination.” Stepping back from this specific series of works, Zweibel’s thematic concerns are often similar to those of her mermaid series, and once again it is beneficial to quote the artist: “In my work, I am interested in the interweaving of private and public realms.  My content is culled from a range of sources: personal and collective history, current societal issues and concepts, mythology, the human body and psyche, and the interplay of reality and fantasy.  My pieces embody the conflicts, losses, and connections between childhood and adult, and factual and fictive, lives.”

A Cut Above the Rest: A Salon of Self-Portraits and Styles, Part 2.  Balance Salon/18 Erie Gallery, Jersey City, NJ.

2007    A Cut Above the Rest: A Salon of Self-Portraits and Styles (Site-Specific Painting Installation).  Midoma Gallery, New York, NY.

Sum of Her Parts.  Arts Guild of Rahway, New Jersey.

2009    Faith Ringgold: A Celebration.  Benefit Exhibition.  The Institute for Women and Art at

The Spirit of the Toy. Cabrini Gallery, Dobbs Ferry, NY.

Artist in the Marketplace Program. Bronx Museum of the Arts, Bronx, NY.

1991    Residency Fellowship.  Skowhegan School of Painting and Sculpture, ME.

Catalogue:  Part and Parcel: The Deconstruction of the Female Body in Contemporary Art.

Meet Me in Brooklyn.  Underground Art:  Paintings at the Transit Museum.

1994    Rochester Democrat and Chronicle.  Exhibits. Bringing in the Shes.

1991    Skowhegan School of Painting and Sculpture. Skowhegan, ME.