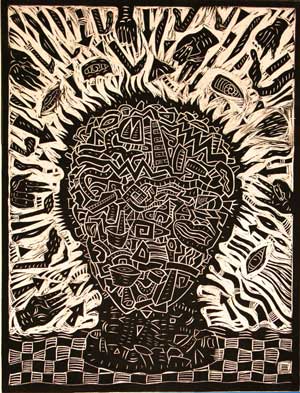 Ixrael, a Mexican born Contemporary artist, began his career in Mexico’s National School of Fine Arts San Carlos in Xochimilco, and in 1993 he emigrated to the United States to further his artistic career. Ixrael’s work has been exhibited in solo and group exhibitions in various galleries, museums and universities in California, Arizona, Washington, Mexico, Puerto Rico, Indiana and New York. His brilliant uses of color, lighting, Mexican printmaking tradition, and the incorporation of diverse artistic disciplines passionately express his ever-growing complex artistic abilities, while his work permeates the soulful joys of his encounters with different cultures. His work, illustrating his fervor for life, is both inspiring and motivating, and has captured public admiration. His exhibition entitled Interior Conversation presented atthe Galería América McKenna Hall at the University of Notre Dame in South Bend, Indiana was a success, and in New York Ixrael was the honorary recipient of the Bronx Museum of the Arts Action Lab Grant and the Puffin Foundation Grant. Ixrael lived in Los Angeles for many years, but now resides in New York City. 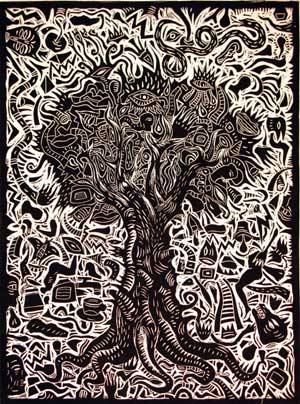 “My art is based on the interaction between the subjective and the objective. Always seeking references and revelations that encompass the things in my own environment while allowing images, forms, signs and symbols to emanate from within. I transcend between the abstract, the figurative and the conceptual, a process I dare called “Dis-Figuration”. I use different media and techniques, keeping in mind and most importantly, offering the observer a freedom of interpretation – to find meaning in the suggested message as if it were a metaphor to communicate ideas and emotions.

When I started my career, my visual language was influenced by the Pre-Colombian arts which interpreted forms surrounding the artists, and synthesized them to make a visual language while explaining the concepts and visions of their own world. However, the experience of living in the United States has profoundly influenced my work. The process of transculturization, and the enormous nostalgia for lost traditions and their ethos, added to the continual search for a new identity and therefore, a new reality. These have transformed and evolved my art into a hybrid, reflecting the bicultural environment in which I live. 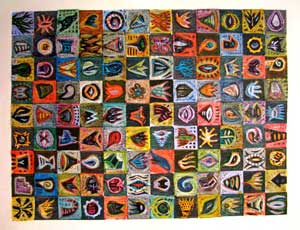 Moving to New York City at the beginning of the Twenty-First Century has turned my artistic expression into something hard to understand. My expression is sometimes seemingly outside a clear definition of “Art” now. The multiple styles, fads, trends, and avant-garde tendencies bombarding the audiences today, together with technology and consumerism, reduce the human being into a part of a whole system. As an artist I feel the need to stay closely in touch with the material reality while feeding my soul with the magic of the elements that surround me. To capture the energy, the movement, and the spaces both busy and empty with forms, textures, and colors in order to create a balance between Earth-eternal, and the contemporary society to which I belong.

As I stated earlier, my painting lives in the spaces between the objective and the subjective. There is the material world, where the city, a tree, a street, a body, or anything else can instigate the creation of a series of forms. These forms then take me on an introspective, spiritual quest. Creating a composition where, as in dreams, there is no place for logic or order, and which, as a dream does, offers up a range of possible experiences that grow with each viewer and each viewing. As the Earth is changing and evolving every day do to the influences of the people surrounding it… so am I.”