“The Journal” is a 6-panel composition borrowing on the images from two earlier series  “Lights Down” and “Fish Tanks” that later on came under the umbrella name “Who Was There?” series. The common idea focuses on the empty ambiguous spaces – empty rooms under hanging lamps either in the moment before the lights go out after someone just left or the second after the lights have come on before someone enters; similarly the empty fish-tanks symbolize the vacuum left after the water and life have been drained out or at the moment of waiting just before new life will be poured in.

The background of these paintings is writings from the journal of a psychotic teenage girl treated on a psychiatric unit who revealed a terrifying personal history of multiple rapes (recently becoming pregnant possibly in result of rape). To make matters worse her cognitive abilities were limited possibly secondary to a head trauma inflicted a year ago by her farther. She felt suspicious, paranoid and betrayed by everyone and appeared to be in an uneasy and ambivalent emotional state – right after something horrible may have happened and expecting to join the outside reality for one more time. Around that time I happened to see Milosh Forman’s film “Goya’s Ghosts” that told, among other things, the story of a young girl in 18 century Spain, played by Natalie Portman, who is imprisoned by the Inquisition to be transformed from a young beauty into a retarded ugly woman. If you may feel that such a story is an over-the-top fabricated and unrealistic overkill that could have happened only in the movies and if real, only in Inquisition controlled 18 century Spain, then what type of rationalization will help us, the residents of the 21st century capital of the world, to make sense of that teenage girl’s real-life story? After all, may be God really does not like ugly? 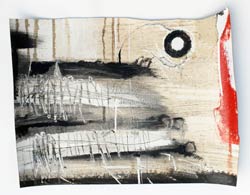 Mr. Ivanov came to the US in 1994 and in 1996 he presented the one-person show, “Tides of Time,” at Ryden Galleries in Anderson, Indiana. Embracing both figurative and abstract imagery in an amalgam of painting, drawing and collage, the works from this period reflected the artist’s immigration experience and his impressions of the “New World.” 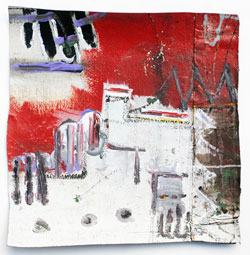 Since 1997, when he migrated to New York City from the Midwest, Ivanov has participated in a number of group and juried shows, primarily at galleries in New York City. He presented works from his interactive multi-panel project entitled “The Revolving Doors” as part of “The Times Square Plan for Peace Project,” for solo shows at the Consul General of the Republic of Bulgaria, and at Chashama and CURB Galleries in New York. These permanent installations have been created on compact disc, presenting an unusual opportunity for viewers to assemble their own compositions from the components the artist has provided. In such a way each viewer’s participation becomes an integral part in unfolding the diversity of emotional interplay between the individual pieces. 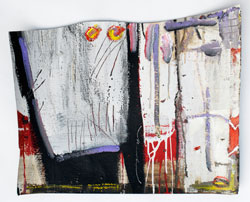 Regardless of medium and scale, Ivanov develops his ideas in thematically related series meant to challenge the observer’s own creativity. Ivanov’s interactive works have been internationally recognized through invitations to the “International Art Festival of Light” in Plovdiv, Bulgaria and the “Contemporary Bulgarian Artists in New York” show in Manhattan in 2003. Over the past several years his work has been selected for presentations at the New York Collection at the Albright-Knox gallery in Buffalo, the d.u.m.b.o. International Art Festival, Miami Art Basel, the Toronto Art Salon, the New York Emerging Artists Gala and the Red Dot Art Fair. His Internet début was marked by an invitational solo show at the ImagineStation website in the spring of 2004, with subsequent presentations in juried shows at Neoimage, Energy gallery, and Projekt30. The artist is also a co-founder of the CURB Arts Group, a nonprofit organization that promotes aesthetic dialogue among international artists through alternative space exhibitions and performances in New York City.

Ivanov and his family live in Manhattan and he continues to balance careers in art and science. 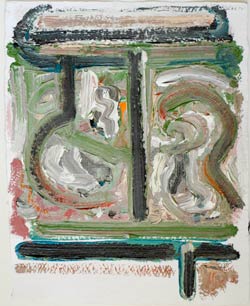