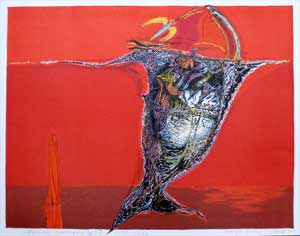 George Dinev was born in 1959 in the town of Burgas, Bulgaria. He graduated from the Art School in Kazanlak, Bulgaria, and later in 1984 from the Veliko Tarnovo University St. St. Kiril I Metodii, majoring in Fine Arts.

Since 1982, George has been participating in various national exhibitions, such as: Friends of the Sea (Burgas), Ludogorie (Razgrad), Small Format (Sliven), and many others. 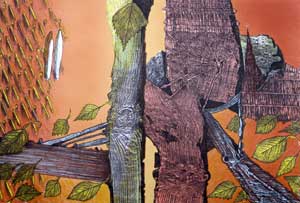 George also does lithography. He has participated in many printing exhibitions – International biennial in Varna, Istanbul and One-man shows in Bourgas, Sofia, Berlin, Stara Zagora, Moskow and others.

George Dinev lives and works in the town of Burgas, Bulgaria. 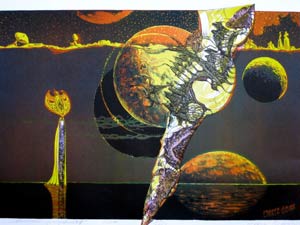 “His art is for those who know how to travel in their dreams, for those whose imagination can fly while awake, for those who adore the light being born from colors. Here the golden key of believe is needed, the treasured reverie from childhood and the delight from the harmony of tints. With these you step on the wonderous silver bridge, you cross the bay of the salamanders and the waterfall at the seven seas; you walk through the forest of elves and stand before the mountain of your own memories. You ask the mountain where your stone lies, you go round the stoned figures standing there for centuries and walk straight into the Semiramida’s gardens. You are a breathless listener to the parable of Shambala, you touch the starry firmament and unveil the sister of night.

For nearly two decades George Dinev walks through the discernible world of the things invisible. Like Alice in the Wonderland he roams throughout the fascination of the absolute and supreme fields of his imagination. There with the power of his artistic talent he gathers the humbleness of Christianity with the heathen passion, wisdom and emotion, mythical civilizations and modern time, legends and visions. There are the fairy-tales he masters and presents in colors and forms -original parables for the human spirit. In his numerous art works he dreams with his eyes opened. Temples and trees, real and imaginary things, water, clouds and sky radiance, they all dance in the vortex of the ether or hold their breath before the face of eternity. These infinite symbols and metaphors, familiar or not, they lead us by the hand through the absurd and in the same time so intelligible world of fantasy. You may like them, you may reject them, but you could never stay indifferent. George Dinev’s artistic predilections are a revelation for those who deep inside feel the need, to overcome the gravity, even for a blink of time.

Years ago George Dinev created a painting, titled “I Dream That I Fly”. And he hasn’t woken up since then…”