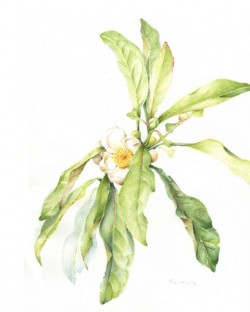 Fran Henig received a certificate in Botanical Art and Illustration from the New York Botanical Garden, after retiring from Lucent Technologies. She worked there for over thirty years as a Division Manager and delved into painting shortly after retiring. She has exhibited throughout the New York metropolitan area, including exhibits at the Horticultural Society of New York, the Brooklyn Botanic Garden, and the Highstead, Frelinghuysen and Reeves-Reed Arboretums, in corporate galleries, and in a solo show at the MetroWest JCC. Henig originally was drawn to botanical art because it offered a way to share her new appreciation for the world around us. She views the plant, vegetable, or weed as a piece of architecture and after paying attention to the shape of it, she is able to construct a piece of colorfully expressive artwork.