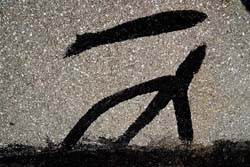 These photographs were made between 2001 and 2008 and come from three series of works.

The Edge series finds people or things in vast spaces of waters or sky, sometimes at an edge and sometimes seemingly lost – both in their spaces as well as in the picture’s space.  The waters are the flood plain of the Ganges and Yamuna Rivers in India, Cape Cod Bay, and the Reflecting Pool in Washington, DC.

The Street Art series was captured on the roads of Boston and Cape Cod.  Metallic fragments with stunning colors appeared on curbs and nearby. On the surfaces of roads, cracks were found that had been beautifully repaired by obviously talented tarbrush-wielding crews of municipal worker-artists, and their artwork plays with primitive petroglyph forms and animal or human shape suggestions.  Occasional still-lifes were also found, fully arranged, on the roads, composed of rocks and tree twigs. 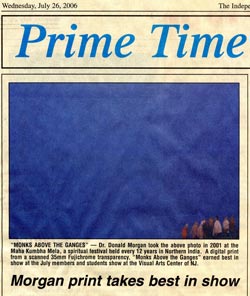 The Rorschach series is mainly images of dead twigs and leaves.  Color and mid tones have been removed and we are left with only gestures, forms and suggestions for our visual play.

Technical Note: All images were digital captures with the exception of the Monks Above the Ganges, which was scanned from a Fujichrome transparency.  They are all archival inkjet prints done on Hahnemuhle Photo Rag or Epson Velvet Fine Art papers, using Epson printers with K3 ink sets.

John Cage said that if you have a heartbeat, you are a musician. I have eyes that have always worked, thankfully, and have always been a visual artist. I spent my young years drawing, but then discovered that photography was a lot easier and I could play with more gadgets, so my entire adolescence was, seemingly, spent in darkrooms and making pictures. I worked in the photo industry as a darkroom technician, printer and occasional event photographer during high school and college, but my professional path has been as a psychologist. I am the director of the Psychological Services Clinic at Rutgers GSAPP, and I teach and supervise students in the doctoral programs. I also have a psychotherapy and biofeedback practice.

I have studied and practiced yoga and the Buddhist dharma for many years, and it might be said that my photographs reflect another of John Cage’s admonitions to artists – I think of it as his Zen perspective – “There’s not enough nothing in it.” It seems to guide my way of looking at the world and making images.

I have been fortunate to study with, and learn from, two superb teachers at the Visual Arts Center of New Jersey in Summit – Jay Seldin, a master fine art photographer and printmaker, and Don Polzo who has an extraordinary command of Photoshop, Lightroom, and the entire digital realm.  I am grateful for the help they have given me.