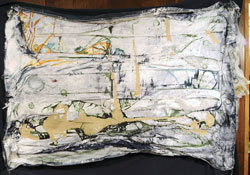 Dennis Dalelio was born in Staten Island, NY in 1976 and grew up West Milford, New Jersey. For the past decade he has been employed as a Fine Arts teacher at Paramus High School. There he teaches a range of photography and video classes with an edge that seeks to introduce students to the power of creating documentaries for social change. He graduated from Rutgers University’s Mason Gross School of the Arts in 1998 with a BFA concentrating in photography, and a mentality that collaborating to make art with others is good for the art world and the community it is made within.  After this degree he continued to work with others on photo projects that gave insight to topics ranging from homelessness to health care in Elizabeth and New Brunswick, NJ, respectively.  When he was married in 2005 he moved to Highland Lakes, NJ. Since then, his artwork has concentrated on his life as a father, responding to the economically, socially, and politically jarring world that still manages to hit his more rural lifestyle, and a celebration of the joys and mess of life.   To do this he uses painting, drawing, music, photography, video, and collaboration with the people and objects of that life in a manner that often culminates into large scale installations..  He received his MFA at William Paterson University in 2010 and continues to work from his home studio.  He has recently participated in several group shows in Newark, NJ and excited about being a part of the emerging NJ art scene. 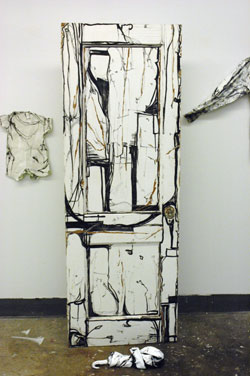 In 2006 I decided to make music with my newborn son and my wife. Not considering myself a musician, yet having an affinity in my younger years for lo-fi indie Rock I reverted back to it for its raw aesthetic and lack of polish or rules. I traded the four track for GarageBand on my Mac and made a song every day for a year. We made a fake band named “Etching” and launched a MySpace page to promote and unveil the hits. I recorded with my family as often as they were awake in the evening, but most often alone with a slightly out of tune guitar and the built in mic on my computer. I sang about everything from suicide bombers, to emminant domain, to having a cold, to falling in love, to lullabys for my son. This was my secret project as I tried within more public graduate school critiques to develop my painting and drawing style into something bigger then the previous 10 years of artwork that I had made. In those visual creations I left stretched canvas behind for clothing and blankets, traded acrylic paint for dirt and rust, began to experiment with digital photography and let the materials dictate the composition as much as my own ideas. During Lent that year I decided to draw an image everyday to go along with the song I made. These were the first images made to illustrate the songs, but were more so were plays with the golden mean and working with black ink on light surfaces. From there, I began illustrating all the songs on scrolls using pen, pencil, brush and ink, and eventually washes of acrylic paint. Then I began to collaborate with my son(now toddler aged) in pencil on paper. He would scribble the foundations of the image. I would match the feel of his images to a song and then add my own lines to his drawings to bring the content of the lyrics and my own styling into the mix. To finish the series I made several large paintings that each represent a month of songs. 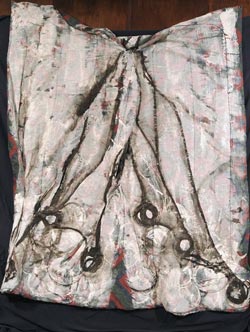 This work, upon its completion, was shown in a William Paterson University installation with my video piece “Three Years of Songs,” which contained every digital photograph that I took for the three year span that the work was made within (in a slit second collage of life flashing before your eyes.) This experiment of video and photography came out of other work that I began that used digital photos to play with what a photograph means in the digital age conceptually. Content of this work was an embrace of the routines of my life as ritual. On the opening of this show I performed songs from “The Best of the Year,” (the cd of the best 40 songs that I “released” that night- people paid their hourly wage for a copy) throughout the evening to celebrate the work as well as admit my secret desire to be a lofi indie rock star. The work shown here at Alfa Gallery is a combination of “The Year of Songs” illustrations and songs as well as the other pieces I made during that time from Sept. 2006 until Nov. 2009. It is combined with my current project to make several box sets of “The Year” where I include 13 discs of the music as well as a hand printed book of every image contained in the show