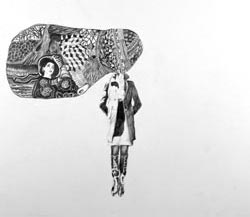 Deborah Pohl was also a Mason Gross School of the Arts at Rutgers University undergraduate student, class of 1988. She later earned her Ed.M at the Graduate School of Education at Rutgers University in 1995 and attended the School of Visual Arts in 2000. Pohl has been in a generous amount of group and solo exhibitions since the start of her career in 1989. She has won several special recognitions for her contributions to the arts including a Painting Fellowship from the NJ State Council on the Arts in 1990, a Grand Prize from the Trenton City Museum in NJ in 1995 and a Fellowship from the Vermont Studio Center in 2005. 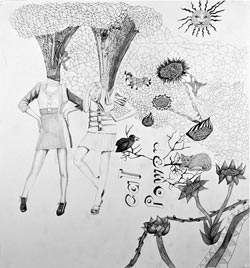 Deborah’s drawings bring back a lost tradition of realism and standard use of pencil to a world where infinite other mediums dominate.  Her pieces are extremely detailed and pay a great deal of attention to value and texture in a believable space.  In the 2010 exhibition “Dream Things That Never Were” Pohl has entered several drawings of interior space and imaginative figurative works.  Wool Walker with Mandarin Collar shows two female figures dressed in contemporary dresses and knee-high boots floating without ground or environment present.  From the collar of their dresses comes an organic cloud-like mass that lends itself to the idea of dreams and thought.  Pohl’s drawing are inspiring additions to Alfa Art’s Salon show.