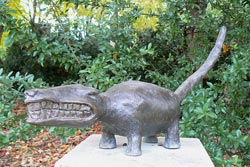 Dana Stewart comes to New Brunswick from California where he earned his M.A. at San Diego State University. Stewart has vast experience in art business and administration positions. He currently works as a Proprietor at “Stewart Sculpture Casting” in Lambertville, NJ and as a Technical Consultant for Art Foundries & Universities in the United States and Canada. His accomplishments in the arts include several exhibitions annually since the start of his career in 1979. 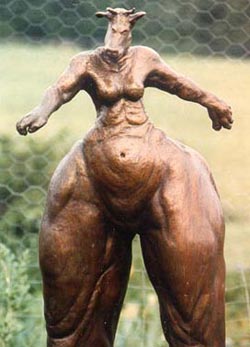 Dana’s sculptures add a needed three-dimensional dynamic to Alfa Art’s gallery space in the “Dream Things That Never Were” 2010 exhibition.  His mythical creatures realized in stone serve to instigate the imaginations of viewers.  The figures reflect universal dreams combining familiar animal traits of different things to create new familiar, but mostly unidentifiable beings.  The images are a tease instigating audiences to identify the sculptures that they cannot possibly already know.  Dana’s sculptures come straight from dreamland and onto the gallery pedestals.