Colleen Sweeney Gahrmann’s current work has taken the role of narrative, personal in conception yet universal in its interaction with the viewer. Most of the work reflect the artist’s own feelings, interpretations, memories and opinions, often related to topics of gender identity, moral and political issues. 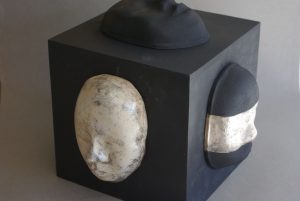 Gahrmann portrays the concept of a time of ignorance and defiance toward change: gun and police violence persist but a blatant disregard for civil rights and equality, which is depicted through the piece I Can’t Breathe, a ceramic raku vessel created in reaction to the death of Eric Garner.

I enjoy most everything about Ceramics I create earthenware and raku pottery that is influenced and inspired by nature and family. My ceramic forms are mostly functional in anticipation of surface effects created during glazing.

I am an artist, a mother, a teacher, a wife, a daughter, a sister, a friend. I am many things to many people.  I am filled with both the joys and responsibilities of these roles.  I am often in conflict regarding the needs of self and the needs of others.   My current work has taken on the role of narrative, personal in conception yet universal in its interaction with the viewer.  Most of my work is a reflection of me, of my feelings, my interpretations, my memories and opinions. They are collections and assemblages that evoke introspection regarding the self, institutions and expectations.

I often start my work with a phrase, an adage, a limerick. I develop a list of words complex and sometimes contradictory that describes a particular theme: memories of a bygone era, a feeling, an expression are developed into a short story of sorts that play themselves out in my mind.  I refine and develop those narratives into sculptures.  Thrown ceramic forms, found objects and discarded furniture set the stage and are an integral part in the narratives that express childhood, gender identity, relationships, moral and political conflicts.

I admire and have been influenced by the art of Louise Nevelson, Marisol Escobar and Judy Chicago. I   find every aspect of the process alluring the physical aspect of throwing on the potter’s wheel, the search and selection of found objects, the piecing together of the parts into an expressive whole. It is this expression of self and the accompanying creative exhilaration that keeps me engaged in ceramic /mixed media sculpture.

July 2009-January 2010 “From Here to There” Arts Council of Morris Morristown, NJ