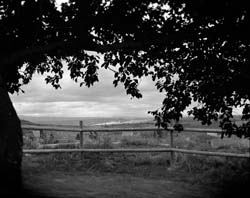 The camera has become less about the image it creates and more about the ability to say, “I was here,” like some vandalism on a beautiful tree. Our connection to our camera has become distanced, held at arms length instead of cradled up next to our eyes. The image is a representation on a screen instead of being the only thing we see through the viewfinder. This distance has altered the role photographs play in our culture.

When I photograph I look for the larger picture; I strive to find moments and places that reveal more than what they offer on the surface. Perhaps this means a small anomaly within the larger picture, or a composition of shapes and shades that would otherwise go unnoticed among a person’s daily routine. I try to see the landscape as something contained within itself. It exists not because I am looking at it, but because it has allowed me to see it for what it truly is. I do not create the soul of the landscape; I merely capture it on film and bring it back for others to see.

I photograph and share my work in the hopes that when a person looks at an image I create they stop and take their time to view it. My images are large and detailed, not easily digestible in a quick glance. There are secrets in them which are not present upon first glance. They are about the missed moments and the ones that will be remembered forever, about slowing life down to those fractions on the dial so that we may relive them at a later date and about being completely present at the time of shooting so that we may go back and see everything that we missed. They are about a time when I was present but they are not about my presence in that time.

Brian Dean graduated from Bard College in 2007. While there he studied under renowned photographers such as Stephen Shore, Larry Fink, Tim Davis, An-My Le and Barbara Ess. He presented his one man show “World Community Grid,”as his final thesis at the Woods Studio at Bard College. At the end of his senior year he received the Eugene Atget Award in Photography. This award is presented to one student upon graduation who is chosen by the faculty for their excellence in technical and artistic understanding in photography. Brian has also had his work displayed in group exhibitions at the Morris Museum and the Hudson Opera House.

Following his education at Bard College Brian worked with Larry Fink as his Lab Manager. In this position he was responsible for such things as printing black and white silver prints for show and sale purposes as well as setting up a digital lab and making high quality inkjet art prints as well.

All the while Brian has been shooting on his own and has recently completed his latest project “Camino de Santiago.” This project is a series of photographs taken while Brian was walking the Camino de Santiago, a pilgrimage route through Northern Spain. He used a Graflex 4×5 camera, which he had to carry with him all 800+ miles on the Camino.