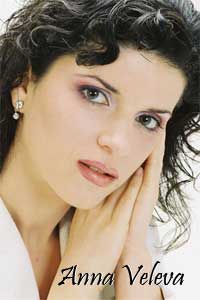 Soprano Anna Veleva, who made her Carnegie Hall debut in 2007, has appeared at major opera houses, recital and concert halls in the United States, Europe and Japan. Recognized internationally for her opera, concert and recital performances a critic for the Bulgarian newspaper Monitor hailed her as “the new opera hope“. She has also made radio, television and theatrical appearances. Among her recent roles have been Violetta in Verdi’s La Traviata, Gilda in Rigoletto, Musette in Puccini’s La Bohemeand Michaela in Bizet’s Carmen produced by Columbia Artists Management.

A native of Bulgaria, Ms. Veleva came to prominence in 2003 after her critically acclaimed debut at the Sofia National Opera in the role of Lucia in Donizetti’s Lucia di Lammermoor. According to one critic, “Anna Veleva sang splendidly in the all-important title role of Lucia at the gala opening. Her Lucia was memorable and was received by the audience with long applause and a standing ovation. Anna Veleva was absolutely magnificent in the legendary “Mad Scene”. She beautifully conveyed the powerfully conflicting emotions and sang superbly the technically difficult arias. Very rarely can a soprano sing virtuosic passages with such ease and brilliance and yet act incredibly” (for more info: visit Anna Veleva’s website).