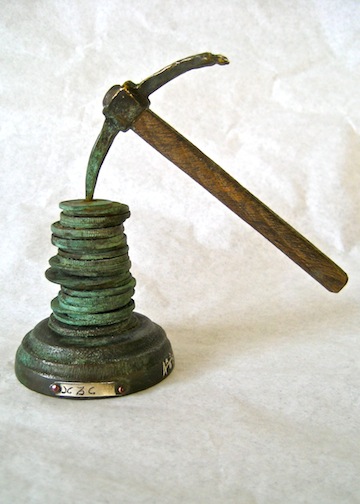 Anatoli Monov began his education in Kunino, Bulgaria at the Art School of Stone Carving. He eventually earned his Master of Arts degree in Art Metal Work at the Nicolai Pavlovich National Academy of Art in Sofia, Bulgaria. Monov has taught at the National School of Art as well as served as a set designer and sculptor for the Film Production Company, NEW IMAGE. This sculptor has had experience as a private contractor in metal, stone, and wood. Anatoli Monov has also worked as a sculptor of molds for internationally renowned artists in Brooklyn, New York and for a small jewelry and fine arts studio called Esper in Bulgaria. Anatoli Monov uses sculpture as a way to communicate something truthful and honest to his viewers, about both the world around him and the human experience. With multiple layers of meaning, his sculptures possess various moods, ranging from grotesque to reflective. Whether he is working with metal, wood, stone, clay, wax, or plaster, Anatoli Monov is molding a human emotion into the material.