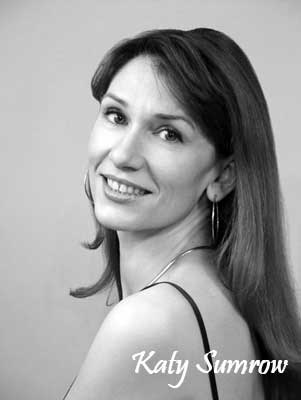 Katy Sumrow was born in Gdansk, Poland. At an early age, she received a full music scholarship to the Chopin School of Music. Upon graduating she signed a contract with the Warsaw Philharmonic Choir and toured through Spain and Germany. Ms. Sumrow performed in the Polish Requiem with Leonard Bernstein and Liv Ullman at the Teatr Wielki in Warsaw on International television. Her repertoires as a Soloist include Baroque, Opera, Jazz, Spiritual and Broadway.

Ms. Sumrow is a founding member of the “Baroque Ensemble Buccina Cantorum” and has recently recorded a CD “Music of the Italian Baroque“.

For more information and to hear some of her songs please visithttp://www.katysumrow.com/

God gave us the gift of the voice- and I try to use it in a good way. I’m singing to make people happy, but also to help people think about their own lives and their own journey.

The nature of my voice

The mezzo-soprano voice has a dark and rich timbre. Translated from Italian the word, it means: “half-soprano.” However, mezzo roles are not always secondary; there are many “pants roles” written specifically for the mezzo voice, particularly from the Baroque era, for example: “Julius Caesar” by Handel. Mezzos also have the very sexy roles like Carmen or Delilah. In the stories of opera we experience extreme emotions: love, lust, hatred, murder… although they seem unreal, they are a reflection of reality, as is all art.

Throughout the process of learning to use the voice, I’ve come to realize that the less I try to “make the sound,” the better and bigger it sounds. I’ve learned to direct the sound in such a way so that it has its own freedom and just let it come out on its own. My great experience has been singing American spirituals in the Baptist church where I work as a soloist.