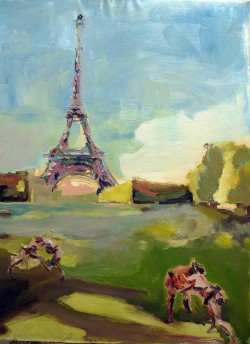 This exhibition features the works of Sarah Zar, Ryan Rusinski, Benjamin Caplan and Pavol Olsavsky III. The concept of this exhibition is to show how Alfa Art Gallery is open to all mediums of artwork, and its interests in global and student issues. Benjamin Caplan’s style is intricate pen-work that captures the attention and draws the viewer in. His highly detailed work depicts many different events going on in the same picture, but they are all related to the overall theme. Between the high contrast of the black ink and the white background, the intricate line work, and the emotional pull; his work demands further examination and interest. Pavol Olsavsky III’s paintings are very representational, realistic and yet dreamlike. His passion for his work reflects in every painting he produces; each has a very strong theme behind its vibrant colors and unique organization, which help expressively enhance the feelings that his paintings portray. He uses these elements of art as an author would use punctuation, by creating emphasis and significance to his work. Ryan Rusinki’s paintings are greatly impacted by the beauty of the natural world. He uses more familiar, earth-toned colors and makes ordinary nature turn into something extraordinary. His work is realistic yet painterly, giving it a more aesthetic look with a different perspective of depth of field. Sarah Zar is a master of both realism and surrealism. She has a very unique view of the world, and this is reflected in every one of her works. Her realistic work captures a perspective on the world that not too many are familiar with, the dark side of reality; while her surrealistic work shows the same perspective, but with a haunting adjustment of the shapes and forms that create a more potent emotional response.  This exhibition brings together many different artists who are remarkable at stirring up emotional responses, which will accompany both the live music and the documentary days. 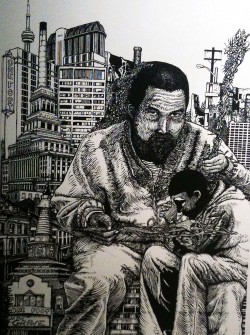 Ryan Rusinski is a painter entering his senior year at Mason Gross School of the Arts, Rutgers University, whose primary artistic interest is the landscape of New Jersey. 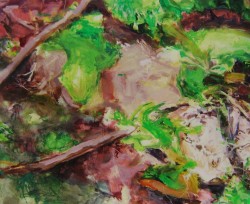 “When I recently found a book of historic photos of my township, I realized that human manipulation of the landscape is far from a purely contemporary occurrence. The semi-rural, often forested landscapes of Readington Township seem

perfectly appropriate, and it would be difficult to imagine that land looking much different. But these old photos show almost none of the trees that I associate with where I live; every picture shows landscapes composed almost entirely of open farmland. These images really sparked and have begun to direct my interests not simply in landscape, but also in how people have affected the landscape, how we use and may misuse the land, and how the landscape reads because of our intervention.” 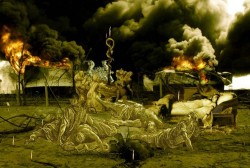 Sarah Zar is an interdisciplinary artist, currently perched in Brooklyn, NY*.  Her work has appeared in places (Sloan Fine Art, Denise Bibro Fine Art, Janet Kurnatowski Gallery, under bridges and on boats, The Highline Ballroom, and so on)  and sensory organs around the world, the most recent of which are in your head.  Her paintings have received numerous awards in NY, and her other visual works range from installations, drawings, collages and sculptures to spatial design and letters to strangers.  She currently teaches at Montclair University, paints on just about anything that moves (itself or her), writes songs, and plays the singing saw with Shayfer James, Yula & The Extended Family, and other sorted specimens of cryptozoology. She has a collection of imaginary avians that enjoy flying around her neck when the winds are rising. She is an editor for ONandOnScreen, and above all things a Collaborator.

*This means that Sarah Zar is a northern-dwelling, migratory “bird”. It traditionally creates novels by painting, and their titles and relationships are nomadic. This species is noted for its colorful use of dream logic.

About the event on August 19th

On August 19th, Alfa will be hosting a live music show showcasing the broad spectrum of styles being played in the current New Brunswick Underground music scene. The bands peforming will be Fairychaser, Suicide Magnets, In Air, Marquise Phantom, Amber of Dreams and Luke Eternity.

Fairychaser is the solo project of NJ native Sally Burtnick. Beautiful, bittersweet songs of lost love and cloudy days, her voice is enchanting and eerie like none other. She is often accompanied by April, who plays a singing set of crystal glasses.
http://www.myspace.com/sallyburtnik

Suicide Magnets is the other name of Wendy H. from Philadelphia. Through filtered vocals she sings somber tunes next to her electric guitar, transcendence into a foggy reverie.
http://www.myspace.com/suicidemagnet

In Air is Stefan and Aaron, an experimental duo native to New Jersey who switch their instruments many times throughout their set; best described as stream of consciousness punk with a free jazz edge.
http://in.air.tripod.com/

As Amber In Dreams and Luke Eternity respectively, best friends and members of the local shoegaze band Eternal Fuzz Kyle W. and Luke B. play songs from their acoustic solo projects; a small glance into their extensive library of melancholy meditations.

This exhibition and events were curated and organized by Nyssa Wawra, Kira McDonal and Mary Paulyshun; three of Alfa Art Gallery’s summer interns. They have collaborated to hold a three day exhibition at the gallery on August 19th, 20th and 21st, 2011.

Kira is hosting a live music event in the gallery on the 19th. She obtained information about local musicians and forwarded her research about the underground music scene in New Brunswick to Alfa’s assistant director, Galina Kourteva. Kira communicated with these musicians to welcome them into Alfa as an open-minded artistic venue area; showing our appreciation of art in all mediums. The musicians purposed to be hosted in the gallery are: Fairychaser, Suicide Magnets, In Air, Marquise Phantom, Amber of Dreams and Luke Eternity.

Mary is hosting an event where the documentary “Seoul Train”, presented by LiNK (Liberty in North Korea) Rutgers Chapter, on August 20th. She chose this documentary to show that Alfa is interested in student activities and global issues; and, in showing this type of interest in Rutgers demonstrates that Alfa is profoundly involved and interested in the New Brunswick community.

Nyssa is in charge of communicating and coordinating with the artists in this exhibition; which is overlooked Alfa’s assistant director, Galina Kourteva, and the head curator, Jewel Lim. While communicating with these artists, Nyssa obtained information and images of the artists’ work, which is then relayed to both Galina and Jewel for further inspection and approval. The artists proposed to be shown in the gallery are: Sarah Zar, Ryan Rusinski, Benjamin Caplan and Pavol Olsavsky III. Nyssa is also supervising the final day of the exhibition, August 21st – there will be an open studio with the artists that were featured; the artwork will be on the walls of the gallery for all three days of this exhibition.