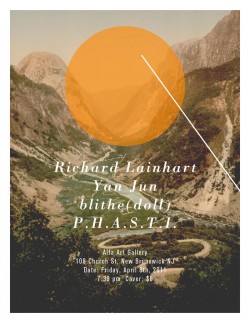 Hati is coming in from Poland to perform with PAS.  Short story: We traveled to Poland last year to play Hati’s festival but it had been canceled due to the plane crash that happened around that time.  We still met with them, and the museum there sponsored a recording session involving PAS and Hati.  Now Hati is coming to the states and we will play on April 8th as P.H.A.S.T.I.  (The CD is available on the net label, Alrealon, by the way)  Would be great if you could make it!  Also Yan Jun is on tour from China, and will be on the bill, as well as Richard Lainhart and blithe(doll), who killed at their last Alfa show. 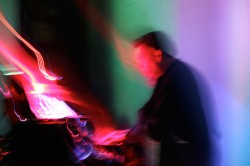 Richard Lainhart is an award-winning composer, performer, and filmmaker based in New York. He studied composition and electronic music techniques with Joel Chadabe, a pioneer of electronic music and the designer of the Coordinated Electronic Music System (http://www.otownmedia.com/chadabe.jpg), at one time the largest integrated Moog synthesizer system in the world. From 1987-1990, Lainhart was the Technical Director for Intelligent Music, developers of innovative computer music software like M, Jam Factory, and UpBeat.

His compositions have been performed in the US, England, Sweden, Germany, Australia, and Japan. Recordings of his music have appeared on the Periodic Music, Vacant Lot, XI Records, ExOvo and Airglow Music labels and are distributed online via MusicZeit. As an active performer, Lainhart has appeared in public approximately 2000 times. Besides performing his own work, he has worked and performed with John Cage, David Tudor, Steve Reich, Phill Niblock, David Berhman, and Jordan Rudess, among many others. He has composed over 100 electronic and acoustic works, and has been making music for forty years. In 2008, he was commissioned by the Electronic Music Foundation to contribute a work to the New York Soundscape concert series. 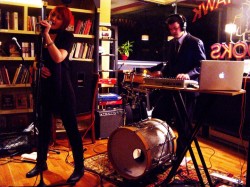 Blithe (doll) is the husband and wife duo of James and Lisa Woodley. The former bassist andvocalist of the influential New Brunswick NJ based band 3 to 6 Inches have returned to explorenew ideas and concepts. Taking new influence from a wide range of electronic music genressuch as Drum & Bass, Trip-Hop, Dub Step and Down-Tempo, James and Lisa have effectivelyblended their old-school punk roots with modern technology to create music that is at onceexperimental and accessible. 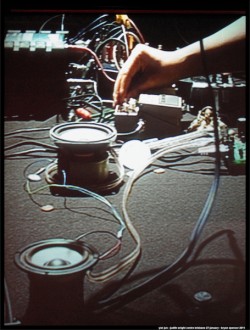 Yan Jun works with sound and language. He was born in Lanzhou in 1973 and is based out out Beijing. He also holds a B.A. in Chinese Literature. As an improviser he uses feedback noise, field recordings, and voice, among other instruments. He also creates site-specific sound art, and is a writer and publisher.

He is the founder of Sub Jam/Kwanyin Records, which runs a weekly event called Waterland Kwanyin (2005-2010) and the annual festival, Mini Midi (since 2005). Yan Jun is also a member of FEN (Fareast Network, Otomo Yoshihide, Ryu Hankil, Yuen Cheewai and Yan Jun). He has performed around China and internationally, and has been supported by Asian Cultural Council as residency musician in New York in 2011.

In April of 2010 PAS, Brooklyn based audio/video project traveled to Torun, Poland to meet Hati and play the 3rd CoCArt Festival. On April 10th 2010, just before PAS embarked on their journey a terrible plane crash happened killing many important people including Poland’s former President Lech Kaczynski. The CoCArt Festival was canceled but PAS still traveled to Poland. During this time they recorded 9 tracks, and a wonderful friendship developed between PAS and Hati. Together they perform as P.H.A.S.T.I.

Hati is an audiovisual project based on sound of ethnic instruments from all over the world as well as hand-made instruments or found objects. HATI forms a link between a personal interest in modern improvised and acoustic music with ritual and meditation. Since 2003 HATI have performed many times in Poland, Germany, Spain, Netherlands, Belgium, Ireland, Northern Ireland, England and France and on festivals, e.g.: Equinox Festival (London, 2009), Bleisound Festival (Monachium, 2009), Wroclaw Industrial Festival (2005 & 2007), Audio Art (Krakow, 2006), Ambient Festival (Gorlice, 2008), Open’er Festival (Gdynia, 2008), Festiwal w Krajobrazie (Inowlodz, 2004-2007), Temple of Silence Festival (2007 & 2008). In 2006 members of HATI organized and performed 2 tours with Z’EV, one of the founders of ‘industrial’ -the cultural movement. All HATI albums received very good reviews, their unusual magic sound and power was emphasized. The band was founded in 2001 by Rafal Iwanski and Dariusz Wojtas. They formed many psychedelic rock and industrial experimental musical projects since the beginning of the 90’. Since 2007 HATI have performed as a duo: Rafal X-NAVI Iwanski and Rafal SABON Kolacki and occasionally with Dariusz Brzostek. They are also the organizers of CoCArt Music Festival (in cooperation with Centre of Contemporary Art in Torun). 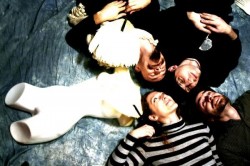 PAS (Post Abortion Stress) started in 1995 out of Brooklyn, NY, USA, driven by the creative talents of Robert L. Pepper working in the mediums of sound and video. Since then PAS has evolved into a collective with many different instrumentations and line ups. Permanent members include Amber Brien, Jon “Vomit” Worthley, Michael Durek, and Will Seesar. Guests and occasional collaborators include, ZEV!, Hati, Steve Beresford, Thomthom Geigenschrey, Matt Chilton (Vultures), Anthony Donovan (Vultures), Damien Olsen, Philippe Petit, Robert Pascale, and many others. They have released 6 full length cd’s and have been on several compilations throughout the years. PAS have performed in various countries including the United States, Germany (including Faust’s Avant Garde Festival 2009, 2010), the Netherlands, the United Kingdom, Macedonia, and Poland, just to name a few. Sound and video installations have also included Chile and the United States (including the 18th Olympia Experimental Festival in Washington). Pepper also curates events in New York such as Experi-MENTAL nights and the Experi-MENTAL Festival once a year at Goodbye Blue Monday.

PAS is a group out to create musical collages through the form of abstract sound. Their name refers metaphorically to those who have been aborted by society, because their point of view doesn’t fit in the constraints of “normal” society. The short name refers to the negative in French, metaphorically negating everything that is established to start from a new beginning. The compositions themselves are more akin to soundscapes than “songs” in the traditional sense. This is not music making with any sense of or desire for commercial viability, but sonic sculptures in the mode of pure art.