The Alfa Art Gallery is proud to present “The Double-Edged Search for the Truth & the Ideal,” the first of two spring exhibitions of the New Brunswick Art Salon 2011.

In the 18th and 19th century, Art Salons were the greatest annual or biannual art events in the Western world, celebrating the farthest advances in academia and the arts. The Alfa Art Gallery, in order to bridge talented and highly esteemed artists with the New Brunswick public, holds its own Art Salon exhibitions biannually in the Spring and Fall.

This exhibition “The Double-Edged Search for the Truth & the Ideal” features Carlos Frias, Dara Alter, Peter Arakawa and Rita Herzfeld, four talented painters from different backgrounds.  True to its title, this first part of the spring exhibitions for the New Brunswick Art Salon 2011 explores the individual’s search for the truth and the ideal in a larger community. The colors of the paintings in this collection are optimistic and vibrant; however, each piece contains an underlying narrative of the struggle to attain knowledge or to illustrate a desire in the bigger scheme of Life. Dara Alter creates multi-perspective, aerial landscapes without a fixed viewpoint as a response to her yearning for an ideal Israel. Peter Arakawa paints his works in only clusters of twos or threes in an attempt to avoid repetition: his works, created from observations of daily life, serve as voyages, combining patterns and shapes that are unlikely together, in search for an order that fits. In his paintings, Carlos Frias, with his intriguing Kandinsky-like palette, attempts to analyze and capture the essence of human beings as organic and spiritual forms with their ability to grow and self-destruct. Rita Herzfeld, acting and reacting in a cycle to each step in her creative process, attacks her canvases with ardent, moving paint strokes to actively demonstrate the gap and interactions between instinct, ideas, self-exploration and, ultimately, truth in a stilled image. 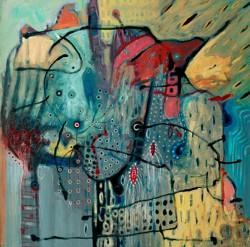 Carlos Frias received his BFA in Painting from the Parsons School of Design. His recent works aims to highlight our humanity , creativity, relationships and  urges to grow and self-destruct while, at the same time, strip us of our spirituality and culture, representing humans as organic forms bound to decompose and regenerate. Additionally, his work visually demonstrates the parallel between what art is able to represent of the evolution of humankind and how much we want to preserve and manipulate art to represent the history of our species. He has exhibited in Japan, the Dominican Republic, Spain, and the United States. 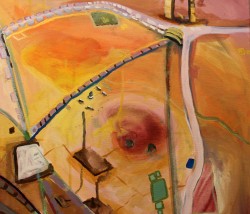 Dara Alter obtained her degree in Studio Art from the University of Guelph.  Heavily influenced by her cultural ties, she paints her memories of Israel in order to examine the North American Jewish nostalgia for an idealized nation.  In the last five years, she travelled to South America, North America, Asia, and the Middle East, which additionally influenced her works. Alter is most interested exploring location and place as it relates to her personal experiences and uses a specific palette that corresponds to the scenery in a particular region. She has exhibited in Minnesota, New York and New Jersey in the United States as well as in Toronto, Ontario in Canada. 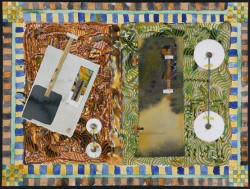 Peter Arakawa obtained his MFA from Mason Gross School of the Arts at Rutgers University. He became an artist through the influences of creative family members.  Arakawa has been a professional artist for over twenty-five years. His works are held in many institutions and museums, including the Zimmerli Art Museum, Newark Public Library, Jersey City Museum, the State Museum, Hunterdon Art Museum and Johnson & Johnson Corporation. 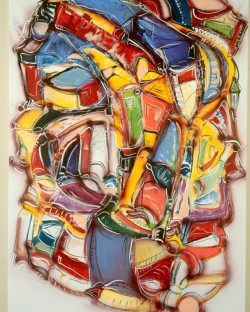 Rita Herzfeld attended the School of Visual Arts and City College of N.Y. and obtained her BA from Rutgers University.  Inspired by her artistic mother, Herzfeld became an artist who grew up believing in the power that comes with creation and its processes from simple tools such as pencil and paper. Her works are held in the Hurterdon Museum of Art, the Zimmerli Art Museum and various private collections.