This upcoming collection will display a wide variety of hand-picked artwork from the NBSCA art collection. These pieces have been collected over the last 30 years as submissions to Sister Cities International Young Artists and Authors Showcase (YAAS). Although differing in ages, techniques, and perspectives, these young artists portray the beauty of unity and the art of diplomacy through their work. With uplifting and celebrative themes of internationalism, the works featured in this exhibition give viewers a glimpse of our sister cities and embrace diverse histories and experiences. This year’s theme, “The Art of Diplomacy”, highlights the goals of President Dwight Eisenhower, who in 1956 founded Sister Cities International to encourage citizens to respect and honor countries throughout the world, their languages, histories, and culture, helping to lead a path to world peace. Motifs such as country flags, the earth, and holding hands commemorate the peace and joyfulness that accompanies cross-cultural relationships as well as the importance of human interaction in the achievement of peace. In “The Art of Diplomacy”, Minori Sakamo a student from New Brunswick’s Sister City Fukui, Japan, is the international grand prize winner from the 2018 NBSC Young Artists and Authors Showcase, her work titled is “The Diary of 1000 Years”.

About the Young Artists and Authors Showcase

Each year the Sister Cities International holds a Young Artists and Authors Showcase (YAAS), a contest encouraging young artists to express the mission of Sister Cities International through original artwork, literature, and photography. There is a new theme each year for the artwork to be based around and the submissions are judged based on originality, composition, and interpretation of the given theme. This year’s theme was “The Art of Diplomacy”, showcasing the importance of citizen diplomats and the innovative ways in which they can help achieve peace through personal interactions across nations. Submissions can come from any Sister City program that is a member of Sister Cities International. The Grand Prize Winners win a cash prize and get to have their work displayed in Sister Cities around the US in a year-long tour. This showcase is a great opportunity to get students and teachers alike involved in the Sister Cities program.

The New Brunswick Sister Cities Association (NBSCA), a member of Sister Cities International, is a nonprofit organization founded in 2000(from the 1970’s until May 2000 the New Brunswick Sister Cities program operated informally as a committee), focused on forming cross-cultural relationships around the world. The association helps to foster cultural and historical education and connections between participating cities Debrecen, Hungary, Limerick, Ireland, and Fukui and Tsuruoka, Japan.  Volunteer members can get involved in many of the organization’s sister cities programs, which include various educational, cultural, municipal, health, technical, trade, economic development, and youth projects. Over the years, New Brunswick and her sister cities have participated in many arts and culture exchange projects including an “Images of my Community” photography exhibit which showcased photography from students across all of the sister cities, as well as participating each year in the Sister Cities International Young Artists and Authors Showcase. For more information, visit their website at www.nbsca.weebly.com

For over a decade, Alfa has held annual Art Salons inspired by those held during the 18th and 19th century. Designed to bridge talented artists with the New Brunswick public, these Art Salons feature exhibitions dedicated to photography, oil and mixed media, watercolor and mixed media, as well as one for a combination of all media. Each year, esteemed juror Rocco Scary judges the exhibition submissions and chooses three winners from each Salon. With support from organizations like New Brunswick City Market, Middlesex County, Magyar Bank, Amboy Bank, Johnson & Johnson, and others; the winners from each exhibition are presented with an award as well as a monetary prize.  The winners for the 2018 NBAS exhibitions, as well as some honorable mentions, will be announced at the Opening Ceremony for the New Brunswick Sister Cities Exhibition. 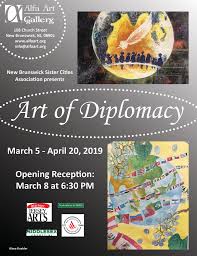