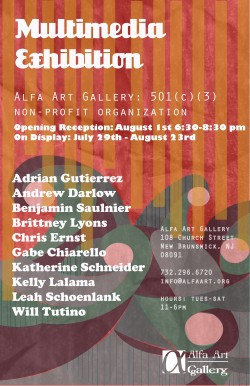 The Alfa Art Gallery is pleased to announce Part II of its Summer 2014 show! Alfa Art Gallery prides itself in exposing the local community to a variety of artworks, which is why for our next exhibition we plan to present the work of students and local artists who have a range of experience in the art world. Opening on Friday, August 1st, 2014 from 6:30 to 8:30 p.m., this show will feature paintings, photography, mixed media and more.

Adrian Gutierrez is a New Jersey artist, who explores architecture, cityscapes, and portraiture through his photography. He is interested in contrasting the imagery of natural and urban landscapes in his work, and the greater implications of humanity that can be found different environments.

Andrew Darlow’s photographs, taken from his series, GRANDmarks NYC, are a continuation of works previously exhibited at Alfa Art Gallery. Darlow is a photographer, teacher, and digital imaging consultant based in Piscataway, NJ.

Benjamin Saulnier is a recent graduate of the School of Visual Arts, where he studied Fine and Studio arts. Benjamin’s work used both paint and fabric and addresses the role of gender in both the history of painting and the projected future in which materials and styles of creating art aren’t confined to gender roles.

Brittney Lyons is a senior at Drew University, where she majors in Studio Art with a concentration in painting. Her work explores nature and landscape and hopes to create a greater experience and connection between her subject and viewer.

Chris Ernst is a self taught artist who draws inspiration from pop art, as well as from the places that he has lived, including Indiana, Virginia, and New Jersey. He is “intrigued by the deconstruction of pop art through the process of human error.”

Gabe Chiarello, is currently a Painting major at Mason Gross, and says that he has always been driven by the process itself, focusing on the material objects as the subjects of his paintings.

Katherine Schneider, a Photography major, also at Mason Gross, draws influence from film stills, working with themes such as possession, and time. Her pieces begin with photographs, which she then adds to with a variety of mediums to add both literal and figurative layers to her images.

Kelly Lalama is a student at Maryland Institute College of Art, where she studies both Illustration and Creative Writing. Her influences include film and literature, and her more illustrative works often deal with the relationship between viewer and subject. She aims to create specific moods or themes in each work by selecting specific color palettes or lighting for each individual subject.

Leah Schoenlank, a recent graduate from Drew University, where she studied Studio Art, creates collages that combine both representational and abstract imagery, focusing on figural, textural, and geometric element. The resulting imagery both roots the viewer in reality, as well as imparting a sense of “the warped, eerie feeling often experienced in dreams.”

Will Tutino, a Visual Arts major at Rutgers University, manipulates materials in order to create the opportunity for a narrative or dialogue to be formed in his sculptures. He draws inspiration from film, film theory, video, and popular culture. His more recent work incorporates moving or manipulated work into his pieces.