Originally from Minneapolis, Minnesota, Mr. Lawrence has  been living in New York City since the mid-1980’s.  Mr. Lawrence received his BFA degree from the Minneapolis College of Art and Design in 1975.  He also attended Hamline University, in St. Paul, Minnesota, and The San Francisco Art Institute.  After college, Mr. Lawrence studied independently with Sally Brown, a Minnesota artist,  and was included in several “alternative-space” exhibitions in St. Paul.  His first one-man show was at the Riverside Café in Minneapolis.

The first show of his work in New York was at the Hudson Guild Gallery in 1991 “The Artist as Innovator,” curated by  Durriyya Abdullah.  That show was followed up by several shows sponsored by the Art Initiatives Gallery.   In 1998, Mr. Lawrence was chosen to participate in the Smithtown Township Arts Council 23rd Annual Juried Fine Arts Exhibition, curated by Tracey Bashkoff, of the Guggenheim Museum – New York; and Alyn Cosgrove, Director of the Nardin Gallery, also of New York.  Mr. Lawrence’s work has been frequently included in curated shows sponsored by Art Group for Gay and Lesbian Artists.  In 1999, his work was selected to be part of “Leslie Lohman Selects” at the Leslie-Lohman Foundation Gallery in SoHo.  In July of that year, Mr. Lawrence was included in a exhibition entitled “Autobiography.”  The show was sponsored by the Appleton Art Center in Appleton, Wisconsin and curated by program director, Judy Cusick.

Following the events of September 11th,  Mr. Lawrence participated in an exhibition “The Unity Canvas:   Artists Respond to the World Trade Center Disaster” at the Williamsburg Art & Historical Center from  September 7 – September 29, 2002.  In 2003, Mr. Lawrence was in charge for securing publicity and helping to organize “3 Friends:  Oil and Water Color Paintings by Ron Csuha, Joseph Lawrence, Luca Mosca.” The GLBT Center in New York from April 10 to May 22, 2003.

In 2012 and 2013, Mr. Lawrence’s most recent exhibitions include participation in the Art for a Change, a benefit for the Obama for President Campaign at Reverse Gallery, in October; and “The Spark” at the Arab American Family Support Center in Brooklyn, NY.  The curator for the Support Center is Maymanah Farha.

Mr. Lawrence works out of a studio at 208 West 29th Street in New York City.  Studio visits are by appointment only. 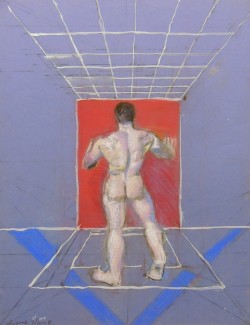 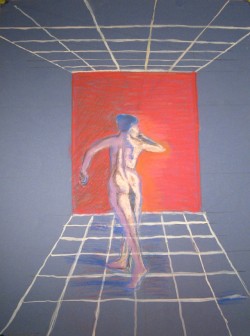