Gabe Chiarello has an Associate Degree in Liberal Arts and is currently a student at the Mason Gross School of the Arts, pursuing a BFA wit 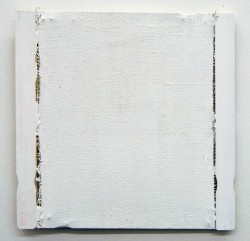 h a concentration in fine painting.

He approaches art in an unorthodox way, garnering inspiration from the process itself. His series for the Small Format Exhibition, detailed the artists exploration of the creative process itself. His “blank canvas” series was a therapeutic process in which the artist relieved himself of the beginning stages of the creative process. The starkness and emptiness of the white background horrifies the artist of the possibility of creative failure, but also excites with the possibility of enlightenment. This serves as a reminder to the viewer that the artistic process always comes full circle, back to creation.

“I have always been driven by the work process itself; I am interested in object making, materiality, and paint as the subject of painting. Impatience has worked for and against me, but it is productivity more than anything that drives my art making.”