In the 18th and 19th century, Art Salons were the greatest annual or biannual art events in the Western world, celebrating the farthest advances in academia and the arts. The Alfa Art Gallery, in order to bridge talented and highly esteemed artists with the New Brunswick public, holds its own Art Salon exhibitions biannually in the Spring and Fall.

This exhibition “Within the Spaces” features the works of Coleen Tyler, Darren McManus, Jian Chen, Michael Bransfield and Sam Ralston.  The concept of this exhibition is to take note of the use of space in partnership with abstract figures and vibrant colors in order to capture the demands each work to be experienced and owned by looking. Tyler’s geometric paintings on wood are spatial illusions that “press and pull” abstract space, using color, lines and shapes to convey emotional states.  Similarly, McManus’ works are geometric and painted on wood. Highly detailed and saturated in color, his odd-shaped, puzzle-like works of art contain unusual combinations of solid forms, causing intrigue and need for reflection. Chen’s paintings, on the other hand, are more representational than the rest, but, nevertheless, explore a surreal feel to the moment depicted by a thick and painterly use of his materials. Some of his works explore “the triple properties of a painting’s dimension: the space behind the pictorial plane, the physical existence of the painting surface per se, and the space in front of the pictorial surface, where the viewers are embodied.”  Bransfield uses lines and color to create a layering effect that makes the paintings feel dense and loose at the same time. Upon closer observation, the viewer may feel that they are witnessing the works from an aerial perspective, creating depth into the canvas itself. Ralston creates single-colored, ambiguous, rounded figures in an equally ambiguous and loose space: his lighting suggests the space is not flat and his blurred backgrounds hint at depth. “Within the Spaces” is an exhibition that ties together five remarkable artists in which they will cause their audience to ponder from work to work what lies beneath, above, and beyond what is being observed.

Coleen Tyler received B.S. in Art Education from the Indiana University of Pennsylvania and her MFA in Ceramics from the Virginia Commonwealth University. Throughout her career, Tyler taught as an art teacher in many institutions, including Bridgewater-Raritan Middle School, Rutgers Preparatory School and Washington Community School. Tyler has been published in several newspapers, including the New York Times, and has exhibited in many shows in Pennsylvania, New Jersey and Virginia. 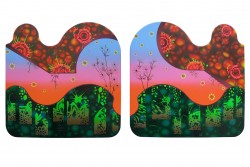 Darren McMannus obtained his BFA in Drawing and Illustration from the Glasgow School of Art in Scotland, BFA in Experimental Studio and Illustration from the Hartford Art School and his MFA in Painting from the Cranbrook Academy of Art. He has exhibited in many solo and group exhibitions throughout the United States and won many awards, including a fellowship from the New Jersey Council State of the Arts, from the Virginia Center for the Creative Arts and from the Mid Atlantic Arts Foundation.

Jian Chen is an emerging artist from Rutgers University’s Mason Gross School of the Arts with an expected graduation date of 2012. He has actively participated in the art community within the university via exhibiting works in several Mason Gross Galleries shows.  Chen also has an M.D. from China, where he originally is from.

Michael Bransfield graduated with a B.A. in Humanities from Providence College. He later studied painting from the Massachusetts College of Art as well as at the New York Studio School of Drawing, Painting and Sculpture. He was also awarded a fellowship to the Yale-Norfolk Summer School of Art.  Bransfield has exhibited in many exhibitions in New York and New Jersey.  He has also served as director of the Metuchen Gallery.

Sam Ralston started painting in his early 20’s. He attended classes at the DuCret Art School and later enrolled at Kean College with an intention of becoming an art teacher but changed his major to graphic design. Throughout his career, he displayed his work in different venues and won a number of awards. He currently works as a graphic designer and paints in his spare time. He has participated in several shows in New Jersey, Maryland, New York and Connecticut.