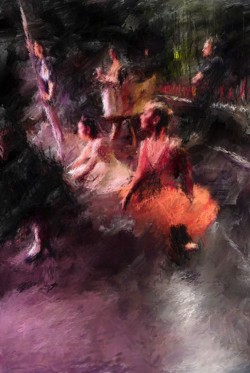 The New Brunswick Community Arts Council is proud to announce the launch of its new project “PDOA – Public Display of Art,” featuring the works of Joseph Schembri as its first installation. “PDOA” is a community project focused on the beautification of New Brunswick. The mission of this project is to promote art education within the New Brunswick community. This first installation is located at the Ferren Mall, on the corner of Albany Street and Spring Street, across from the NJ Transit New Brunswick train station.

The works of Joseph Schembri capture dancers and musicians in performance and at rest. They are photographic images, digitally painted and printed as large format giclees, reminiscent of the impressionists in the late 19th century, with their quick, vibrant strokes. For Mr. Schembri, the aim is to reinvent these captured moments as a dream-like version, a hybrid of reality and illusion. Influenced by Edgar Degas not only in subject but also in color, this collection is delicate but brimming with the performance energy of the subjects. Mr. Schembri’s subjects include dancers from Buglisi Dance Theatre, NY International Ballet Competition, and New Jersey Ballet, and musicians including Junior Mance, Warren Vache, Richie Cole, and Rosie Ledet.

Joseph Schembri is a freelance photographer. Within his 26 years of experience, focused on capturing dancers and musicians in performance, he has studied with Sandi Fellman at the Mason Gross School of the Arts at Rutgers University, worked with Lois Greenfield in her New York City studio, and has completed various workshops and seminars. He served as the photographer for The New Jersey Ballet Company for 22 seasons and was appointed official photographer of the New York International Ballet Competition in 2005. His work has been exhibited in several galleries in New Jersey, including Artworks in Trenton, the Barron Arts Center in Woodbridge, and the Perkins Center for the Arts in Moorestown. His works have also been published in The New York Times, The New York Daily News, Pointe Magazine, Dance Magazine and Attitude and in the books The Nutcracker Backstage: the Story and the Magic and Paper Mill Playhouse-The Life of a Theater.