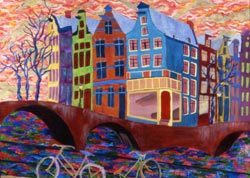 The Alfa Art Gallery launches its first solo exhibition of the year with Karen Eve Friedland’s “Patterns of Sensation,” a collection of four series. The pieces, varied in medium and subject matter, are created with the intention to make the viewer ponder on the people who live in the spaces that she paints. Stylistically reminiscent of Matisse’s flattened figures and Van Gogh’s color schemes, Friedland’s work emits a dream-like atmosphere while still being familiar and homey to the audience. Delightfully skewed and beautifully paradoxical with disagreeing perspectives in her work, the viewer is forced to linger awhile and conclude that the spaces depicted are outside reality. 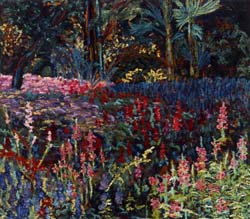 Karen Eve Friedland received her degree in Journalism from New York University, MBA from the New York Institute of Technology and studied Interior Design in Pratt Institute. Though she only occasionally works as a consultant of Interior Design, Friedland adamantly keeps her life creative by teaching art and dedicates most of her time developing her work as artist. Friedland has won many awards and exhibited in New Jersey, New York, Washington, Mississippi and Pennsylvania.