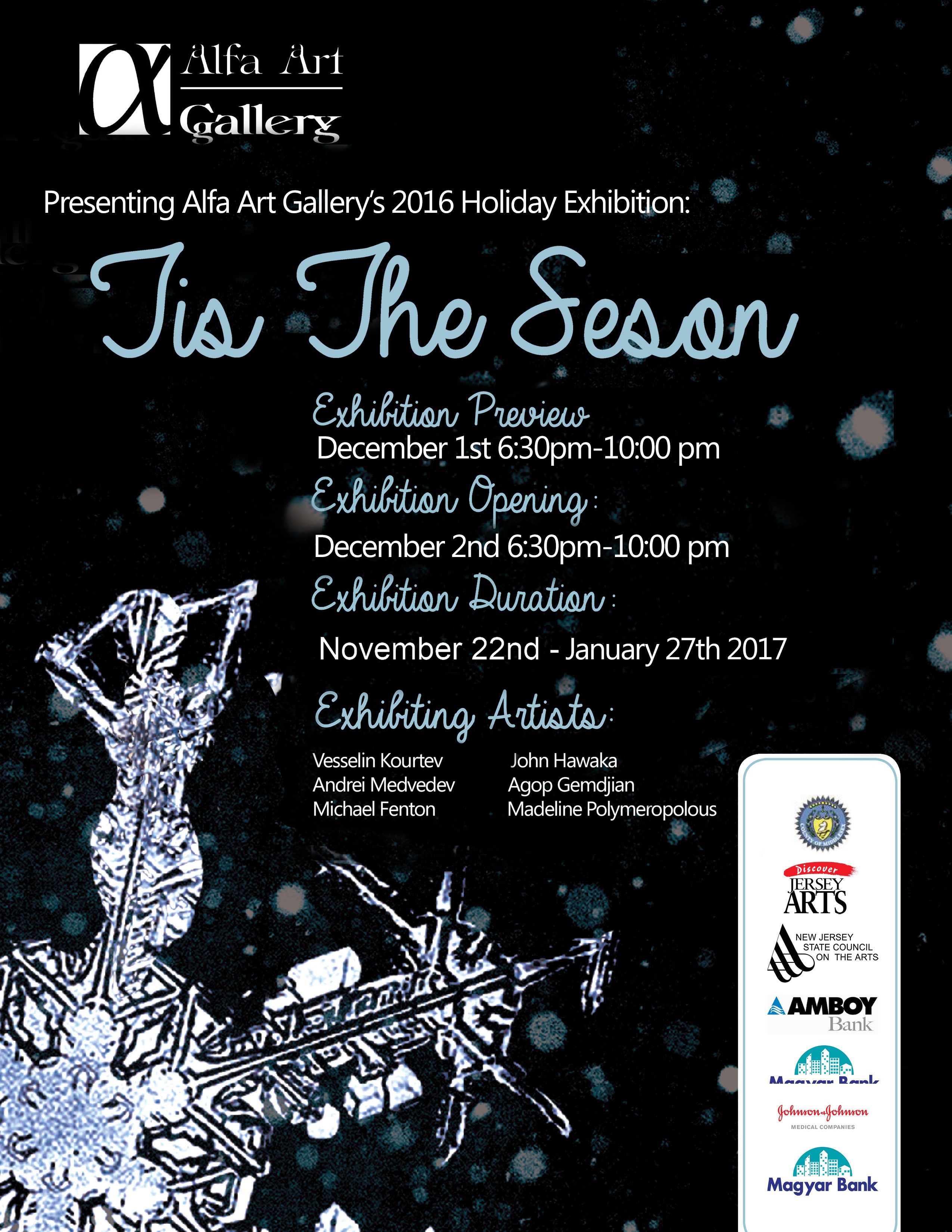 We are pleased to invite you to Alfa Art Gallery’s Holiday Salon, “Tis the Season”, highlighting artists who excel in their work of capturing the true essence and beauty of art. The 6 featured artists are prominent local figures whom have exhibited their work in gallery shows throughout the greater New York area or have worked with Alfa Art Gallery in previous exhibitions. Through the exhibition, you will witness local talents from the New Brunswick area, and beyond, whom reflect and inspire the rich artistic culture of the community.

The pieces featured in Alfa Art Gallery’s “Tis the Season” Exhibition exemplifies a mastery of abstract expression. Relying on form, color, and concept, our artists invite you to explore their worlds of expression. Representing reality through abstraction, the six artists create exquisite works that find inspiration from figurative forms. Please join Alfa Art Gallery for a night of enjoying intricate artworks during the happy holiday time.

Madeline Polymeropolous, has resided in New Brunswick for the past 40 years.  Throughout her career, she has experienced the variety of the world, having traveled her hometown of Dallas, Texas to Greece to Boston where she received her B.F.A. and M.F.A.  from Boston University with a concentration in Painting and Drawing. In addition to her outstanding resume, Polymeropoulos has a MS from Parsons in Visual Arts and Museum Education.

Polymeropoulos finds inspiration from her experiences within the world.  Her works exhibit colorful and textured landscapes and figures through bold expression of geometric shapes.  Works are on paper constructed through mixed media of oil sticks, acrylics, pencil, and collage.

Michael Fenton, a New Jersey artist, was born and raised in upstate New York but has lived in New Jersey for the past 30 years residing in Morris Plains. He is a painter who works in a variety of different modes and sizes, ranging from Korean folk painting to realism to near-impressionism. Working primarily from the memory and imagination, he attempts to distill his images to a point where there is a powerful emotional resonance, without being specific or didactic. He paints primarily in Korean Water Color, oil and acrylic, and the vast majority of his works involve the figure in one way or another. Fenton’s paintings comprise several distinct, yet interrelated bodies of work. In addition to his studio work, he also continues studying the ancient Korean folk art and drawing in a private capacity.

Michael focuses on portraits which should evoke emotions from the viewer. His subjects are painted naturalistically and show great detail. He focuses on detail by making use of lighting (light and dark colors) within the painting. The subject’s emotions can be seen by the body language. A perfect example of his work is his “Chet Baker” portrait, the painting casts the subject in a dark area with a light illuminating the weathered details of the subjects face.

Agop Gemdjian accomplishes classical techniques of etching in his prints, supplemented with the emotional atmosphere that he creates with sudden bright colored stresses, odd surrealistic states, and metamorphoses of figures and objects. There is a well-mastered combination of heterogeneous figurative components – images, color spots with abstract impact, embossed elements and even personal poetry entwined in the pictorial space. All of this creates an instinctual density and an active suggestion of the works these features manifest themselves especially in the plastic works of Agop Gemdjian. Compound works with six, nine, or twelve prints, drawings and plastic collages, combining real objects, various matters, light and words lead the feelings and the thoughts of the spectator into a complex picture of human states, where the spirit tries to break away of the enormous heaps of the material world, and to purify itself.

John Hawaka paints for the sheer enjoyment of doing so because he loves the challenge. He enjoys being a studio with brush in hand, facing a “blank canvas.” Over the years he has experimented with many mediums and techniques-from casein to oil to acrylic from wood to canvas to laminate. Currently, he uses a mixture of lacquer and several other mediums on laminate. He uses the lacquer mixture for its fluidity and the laminate for its smooth surface, which allows the paint to flow freely. Alfa Art Gallery is proud to announce that they are Exclusive Representatives of John Hawaka.

Vesselin Kourtev has over 20 years of experience as a professional fine artist. Born and raised in Bulgaria, Vesselin Kourtev received a high school degree in Fine Art from the Fine Arts School in the historic city Kazanluk, as well as his MFA degree from The Faculty of Fine Arts at the University of Veliko Turnovo, the capital of the Second Bulgarian Empire.  From 1989 until 2002, Vesselin worked for the National School of Stage and Film Design in Plovdiv, Bulgaria. In the years following, he remained active within the Bulgarian art community and participated in a large number of national and international exhibitions and competitions. Vesselin was featured in The Good Living Magazine from Saint Peter’s University Hospital, New Brunswick in 2008 and has exhibited his work in over a dozen shows across New Jersey and New York.

Andrei Medvedev Graduated from the Department of Theatre Set Design at “Memory of Year 1905” Art College.  Medvedev’s works are now in Moscow Tretyakov State Gallery and in many high profile personal collections around the world. Andrei Medvedev has developed his own style, which has close connection to his authentic personality and his insight into people’s souls and psychology. Without leaving beauty behind, Andrei gives his paintings depth of thought, and questioning of the main forces present in all of humanity: good and bad, hope and fear. The Russian artist has been painting since the age of four, when his grandfather first encouraged him to pursue and develop his talent. Now, as an adult, we can sense in his creations the strong influence and inspiration he found in artist Diego Velasquez, Medvedev’s most favored artist. The resemblance is most clear in observing Medvedev’s work and Velasquez’ greatest creation, Las Meninas.