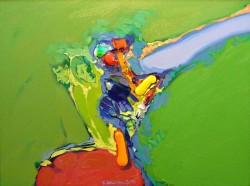 Two New Brunswick-based Arts organizations (aided by a third) have announced a new partnership.  Alfa Art Gallery, which has called New Brunswick home since 2008, will partner with George Street Playhouse in presenting a series of rotating exhibits to be presented throughout the Theatre’s 2012-13 season.  The exhibit, co-sponsored by The New Brunswick Cultural Center, will be changed to correspond with the opening of each of the Playhouse’s five productions.  Located in George Street Playhouse’s Cabaret lobby space, each display will be available to view during regular box office operating hours.

The exhibit will be on display at the New Brunswick Playhouse through the run of its first production of the season, Lewis Black’s One Slight Hitch, and remain on view through November 20.  An opening reception celebrating the artist and the collaboration between the organizations is scheduled for Tuesday, October 9 beginning at 6pm.  For further information, contact the George Street Playhouse Box Office, 732-246-7717, or Alfa Art Gallery at 732-296-6720, or visit the organizations websites:  www.GSPonline.org , www.AlfaArt.org or www.kourtev.com.

“I am delighted to help facilitate this wonderful partnership,” said Norma Kaplan, Executive Director of The New Brunswick Cultural Center and Managing Director of George Street Playhouse.  “Fostering this type of mutually beneficial relationship is one of my chief goals here in New Brunswick.  I couldn’t be more pleased.”

The inaugural exhibit in the series will be The Message, a solo exhibition by Vesselin Kourtev.  First presented in April 2011, this series takes place in an abstract world, where each viewer gets lost, wanders and, eventually, comes back to reality with his interpretation of what lies beyond the present. The fictitious world of Kourtev’s paintings is visually divided into two, tangibly connecting what is seen by the eyes and the mind. His works also explore what lies beneath the surface. Kourtev imprints his canvases with powerful strokes that protrude, hopeful hues and vague figures, leaving the audience with the impression of the depth of the human experience and relationships. Kourtev’s message is relative and, therefore, a timeless memento, unglued to any specific period.

Vesselin Kourtev is the Founder, Director, and Resident Artist of the Alfa Art Gallery. Born and raised in Bulgaria, he received his MFA from the Faculty of Fine Art at the University of Veliko Turnovo. In 2002, after many years of exhibiting in Bulgaria and Europe, and working in National School of Stage and Film Design in Plovdiv, Bulgaria, Kourtev moved to New Brunswick. Five years later, he founded the Alfa Art Gallery. Kourtev continues to work on oil, watercolor, and mixed media pieces.

Alfa Art Gallery is a non-profit organization dedicated to the discovery and support of emerging and well-established artists.  A vital player amongst art organizations since 2008, the gallery has established itself as a part of New Brunswick’s cultural hub and recently received an award from New Brunswick City Market for Outstanding Contribution to the Arts and Business Community.

Under the leadership of Artistic Director David Saint, George Street Playhouse has become a nationally recognized theatre, presenting an acclaimed mainstage season while providing an artistic home for established and emerging theatre artists.  In August 2011, the Playhouse appointed noted arts administrator Norma Kaplan Managing Director.  Founded in 1974, the Playhouse has been well represented by numerous productions both on and off-Broadway – recent productions include the Outer Critics’ Circle Best Musical Award-winner The Toxic Avenger, the Outer Critics Circle, Drama Desk and Drama League nominated production of The Spitfire Grill and the Broadway hit and Tony® and Pulitzer Prize winning play Proof by David Auburn, which was developed at GSP during the 1999 Next Stage Series of new plays.  George Street Playhouse programming is made possible in part by funds from the New Jersey State Council on the Arts/Department of State, a partner agency of the National Endowment for the Arts, and by its lead season sponsor Johnson & Johnson.  The Star-Ledger is the 2012-13 print media sponsor of George Street Playhouse.