This year’s Alfa Gallery anniversary exhibition present three artists who all create abstractions, but with different approaches to technique and imagery: Chinyee, Bertha (Bert) Thompson and Tony DiBella. Since its emergence as a viable and accepted form of modernist art near the beginning of the 20th century, abstraction has continued to act as a method of image-making that seems essentially boundless in its diversity and potential to inspire imagination and technical experimentation.  Within the work of the three artists in this exhibition, one can appreciate the flexibility of abstraction to accommodate differing and highly personal sensibilities and interests, yielding particular exemplars of the range of abstract imagery, whether painterly or geometric, gestural or linear, opaque or filled with light.  These artists also demonstrate how, behind the immediate impression of abstraction, sources drawn from the real world may be at work, whether literal or symbolic. 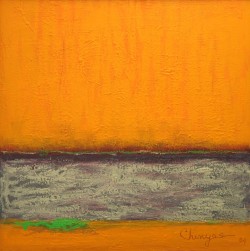 Over a career spanning more than 50 years, Chinyee’s art reveals a progression of vividly realized themes that are notably diverse yet equally reflective of a coherent, lifelong vision.  While her earliest works show full mastery of traditional Chinese ink techniques and Western realism, her major influence turned out to be Abstract Expressionism.  Within this style, often known for aggressive paint-handling, some artists preferred a refined and somewhat muted manner of expression, using a lighter touch and more delicate and complex manipulation of color.  This style has been called “lyrical abstraction,” and Chinyee’s art is appropriate to this label.  Always exploring and receptive to fresh insights, she moves smoothly from medium to medium, working with oil, watercolor, oilstick, enamel, acrylic, China marker, and collage.  Her abstractions derive in part from both the calligraphic and atmospheric traditions of Chinese art, as well as the Western mode of color field painting.  While her art is basically abstract, Chinyee’s Chinese heritage, in which nature is the primary source of art and philosophy, intermittently affects her imagery.  Open to all sources and sensitive to the feeling of life – or ch’i – which Chinese artists find essential to meaningful expression, Chinyee allows references to nature to suffuse into her work, which might be specific, such as a lotus plant, or general, as in horizontal bands that suggest land and sky. 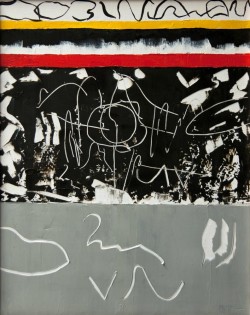 Bert Thompson’s work has alternated between abstraction and realism; the current presentation concentrates on a group of abstract paintings she produced between 1992 and 1998.  These works are typified by geometric shapes and divisions, often with large areas of black, gray or white, set off with color forms that are sometimes bright and primary, but frequently muted, rather like rock or sand.  The paint is laid down in impasto, with rich and rather glossy surfaces built up with evident individual strokes.  Accompanying the large major compositional elements such as triangles, rectangles and circles are scatterings of linear motifs that enliven the compositions and resemble graffiti or scratches into the walls of buildings.  Indeed, these abstractions by Thompson are cogent, if surprising, painted reactions to the physical environment of Urbino, Italy, which deeply moved her emotionally and visually.  She has written: “The Ducal Palace had intricately carved marble around all the mantels, doors and window frames – a light and airy feeling.  I found myself absorbing the colors – ochres, umbers, siennas; the textures and the effects I saw…. These I used in my abstractions.”  Thus, these works are to some degree abstract translations of physical structures, with the stucco-like or incised impasto surfaces mimicking the irregular stone of buildings, in refined or weathered aspects.  To these features Thompson may add shapes that seem like symbols or letters, providing further levels of interest to a series of paintings whose individual works are by turns active, mysterious, elegant, and elegiac. 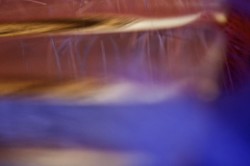 At a quick first glance, the imagery of Tony DiBella might suggest subtly painted abstractions of the color-field variety, perhaps produced by watercolor or airbrush, given their smooth color transitions and flashes of light.  However, inspection of DiBella’s intriguing compositions of hazy color and indistinct forms reveal images made not with paint and brush, but through photography, transforming quite ordinary objects and their details by carefully controlled use of out-of-focus imagery and lighting techniques.  In general, his method involves illuminating an object with ambient light and carefully directed beams from small LED flashlights, then moving around the object and manually changing his camera’s focus, seeking the interplay that will produce a satisfying image.  Colors may be added by reflection of materials placed around or behind the subject.  From time to time, he leaves just enough of his subjects in focus to allow the viewer to comprehend their original physical presence, their solidity, although rarely in amounts sufficient to easily reveal the identity of the objects.  Generally, he titles his photographs not with their true source, but rather with a form or concept suggested by the color miasmas and amorphous shapes in the final composition. For example, The Dove is the result of photographing through a paperweight; Sandbar captures effects derived from a candelabra of square-edged, modern design.  In DiBella’s work, we find the path to abstraction moving straight through the real world, and, via the agencies of technology and imagination, creating a new world of invented form, color, and light.