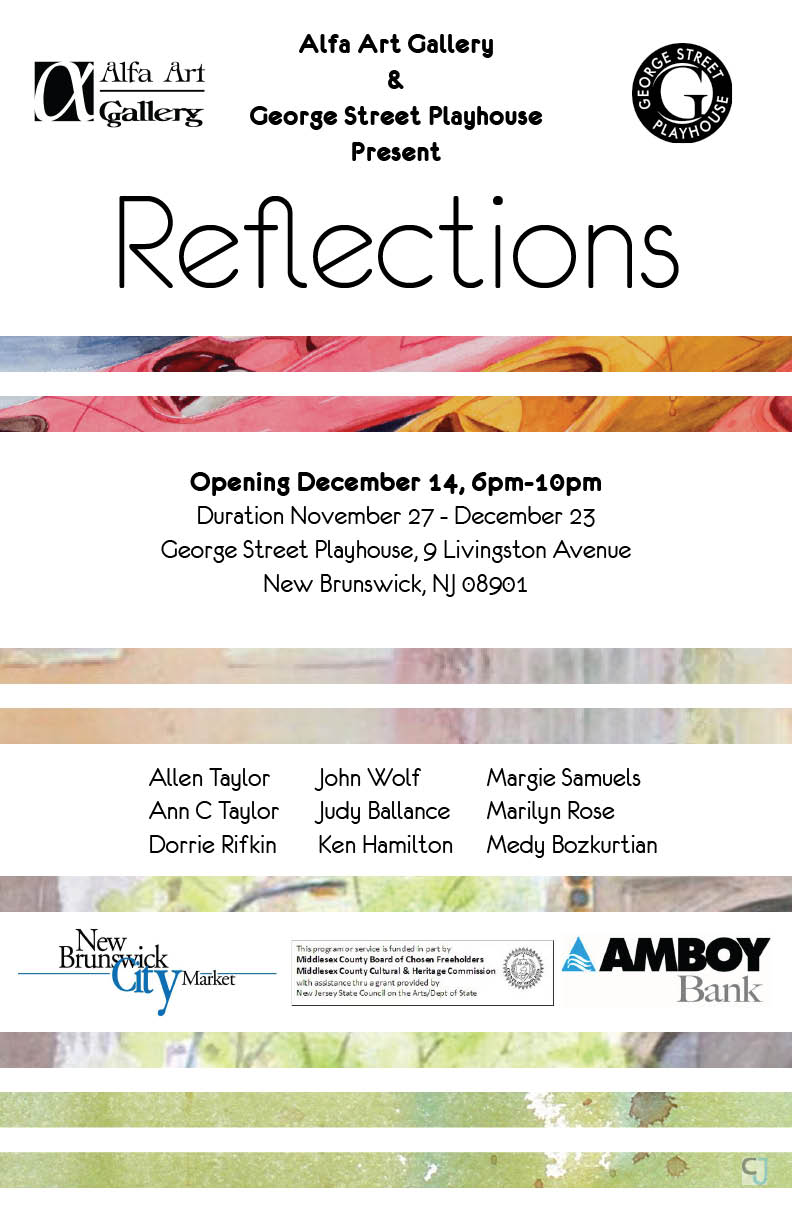 George Street Playhouse and the Alfa Art Gallery continue their collaboration which began with the start of the New Brunswick Theatre’s season.  Produced in association with the New Brunswick Cultural Center, the new exhibit is titled “Reflections,” and features watercolors by Allen Taylor, Ann C. Taylor, John Wolff, Judy Ballance, Ken Hamilton, Margie Samuels, Marilyn Rose, and Medy Bozkurtian.  The exhibit will be available for viewing during the hours when the Box Office is open, beginning November 27 through December 23.  A reception celebrating the artists is slated for Friday, December 14 beginning at 6pm.  In addition, the work of local artists will be available for sale the same evening as the Playhouse hosts a Holiday Market, presented by the New Brunswick Arts Council from 5:30 – 10:30pm.  Opportunities abound for holiday shoppers looking for unique items, and all the paintings in the exhibit will be for sale as well.

For further information, contact the George Street Playhouse Box Office, 732-246-7717, or Alfa Art Gallery at 732-296-6720, or visit the organizations websites:  www.GSPonline.org or www.AlfaArt.org.

Be it docile boats resting in a harbor or a bird approaching its landing, this collection of watercolors delicately captures common occurrences that are often overlooked.   Because of the medium’s transparent qualities and precious nature, these works have a gentle kindness to them which produces a distinct calming effect. And as each luminous layer of liquid pigment sits clearly visible over the next, few marks are left unseen. As a viewer one feels at ease, as if peacefully floating in water, reflecting on the beauty of moments overlooked.  All the artists are members of Essex Water Color Club, NJ, celebrating its 80th birthday this year.

Alfa Art Gallery is a non-profit organization dedicated to the discovery and support of emerging and well-established artists.  A vital player amongst art organizations since 2008, the gallery has established itself as a part of New Brunswick’s cultural hub and recently received an award from New Brunswick City Market for Outstanding Contribution to the Arts and Business Community.

Under the leadership of Artistic Director David Saint, George Street Playhouse has become a nationally recognized theatre, presenting an acclaimed mainstage season while providing an artistic home for established and emerging theatre artists.  In August 2011, the Playhouse appointed noted arts administrator Norma Kaplan Managing Director.  Founded in 1974, the Playhouse has been well represented by numerous productions both on and off-Broadway – recent productions include the Outer Critics’ Circle Best Musical Award-winner The Toxic Avenger, the Outer Critics Circle, Drama Desk and Drama League nominated production of The Spitfire Grill and the Broadway hit and Tony® and Pulitzer Prize winning play Proof by David Auburn, which was developed at GSP during the 1999 Next Stage Series of new plays.  George Street Playhouse programming is made possible in part by funds from the New Jersey State Council on the Arts/Department of State, a partner agency of the National Endowment for the Arts, and by its lead season sponsor Johnson & Johnson.  The Star-Ledger is the 2012-13 print media sponsor of George Street Playhouse.