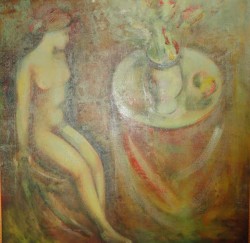 Yuri Grigorian was born in a small village Tsovatekh of the ancient legendary land of Nagorny Karabakh in 1946. The painter now lives and works in Moscow. In 1969 he graduated from the theater department of the Moscow Art College 1905, and in 1976 – Moscow Art Institute Surikov, workshop by Professor N. Ponomareva. He started his creative activity by participating in the Youth exhibition of Moscow artists in 1972. Distinguished by a rare capacity for work and diligence, upon graduation of high school, Grigorian was able to present an exhibition organized by the “Youth” magazine for more than 70 canvases. Two years later Yuri Grigorian became Fellow Union of Artists. His work “Armenian Woman” had won the artist the Gold Medal at the “Contemporary Soviet Painting Exhibition in Japan in 1987.

The main creative features of the artist are – bright colors, complex texture, and harmonious composition. For all the variety of styles – landscapes, still lifes and nude models, Grigorian is particularly good at female portraits. More than 50 works by Yuri Grigorian are in the collections of public museums and galleries in Russia and the former Soviet Union, including the State Tretyakov Gallery, the Museum of Oriental Art, the Museum of Contemporary Art in Moscow and State Gallery of Armenia.

Yuri Grigorian style is vivid and expressive, and his paintings owe their beauty to the biblical tranquil wisdom. He works as graphic artist, monumental painter and stage designer. He never rests on his laurels, though being awarded many times in this country and abroad, which brought him fame.

The scope of his interest is very broad. He tries to rebuild the reality according to the laws of beauty. “I try to reflect wisdom and harmony of the world in my paintings, and this makes me really happy. In the world around us everything is expressive due to the inner sense each generation finds in its time.”

Carot-”Nostalgia”. Exhibition of paintings at the Museum of Glinka, Moscow
Museum of Contemporary Art, Moscow
Exhibition dedicated to the anniversary of Moscow Union of Artists, Manege, Moscow>

Exhibition in Nice, France
Exhibition at the German Embassy, Moscow

1989  Exhibition in the house of foreign countries, Moscow

1977  Exhibition in the magazine “Youth”, Moscow