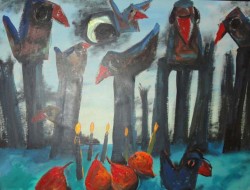 Vasily Ivanovich Shevchenko was born in 1926 in the village of Kolybelnaya(Cradle Song), Rostov Region, Russia.

After the war he moved to Lipetsk Region (Central Russia).

He never received any formal artist education, but had been drawing since he was a child.

In 1988 his first personal exhibition took place in the town of Lipetskin the premises of the local Union of Artists.

After this exhibition, he joined the Union of Artists.

The exhibition was a great success and was shown in Madrid (Spain) in the framework of “Week of Russian Culture” in Spain.

Starting with this event, his work gained recognition.

He participates in International exhibitions in South Korea, Japan, France, and Germany.

Many of his works can be found in Lipetsk Art Museum.

He lives away from the world of professional artists; his style is very individual and pure.

He creates his own myth, in which the modern world and folklore entwine.

The painter is a master of depicting his world through surrealism.

He is conformist as his artwork heightens our awareness and alters our perception; his style, though surrealist, is also humanistic.

His artwork depicts the real through the surreal – what appears to fake is not.

He philosophizes over matters concerning the cycle of life (birth and death) and the question of ethics (good vs. evil).

He overcomes certain features of primitivism, to which narrative style is typical:.

He rises to philosophic generalizations.