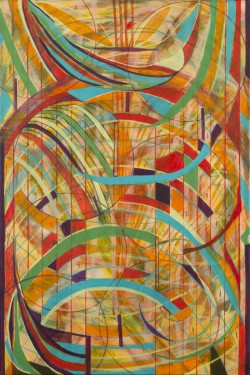 An embryo is physically connected to its mother from conception. Once born, a child experiences daily connections with and communications from care givers and family members. From the time a person wakes in the morning until sleep comes at night, he/she is constantly receiving messages and information and responding to them.

Connections and communications constantly support, shape, and limit us. Today, our minds sort through masses of information presented by media, computers, phones, and technological devices. By disconnecting from these devices we find quiet time to ponder who we are and what we want to do – not just what others want us to be or do.

Human and technological connections in different forms wrap around and engulf us day after day. We need to maintain those connections and receive those messages that are important for our well being and growth. However, the challenge is to make choices and to disengage from people and devices that are non-essential and harmful.

The colorful, abstract paintings in the series “Connections & Communications” express visually the depth of entanglements in relation to the differing communities in which we live, the communications we receive, and the complexity of the technology with which we engage. Feelings of happiness, sadness, fear, hope, and despair can be found in these entangled line paintings. Each one challenges the viewer to question the benefits and detriments of today’s complicated world. 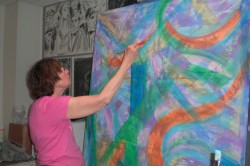 Our lives are brief, our journeys personal. Hopefully, the images in my paintings will evoke thoughts and feelings about your life journey. As Dag Hammarskjold, the Swedish statesman, wrote: “The more faithfully you listen to the voice within you, the better you will hear what is sounding outside.”

Ms. Tamborlane is an active member of the Art Students League, the New Century Artist Gallery and the Pen and Brush in New York City. In New Jersey she is affiliated with the New Jersey Contemporary Art Group, Studio Montclair, the Arts Council of the Morris Area and the Woodbridge Artisans’ Guild. Her website is Tamborlane.com and her email is Tamborlane@aol.com. 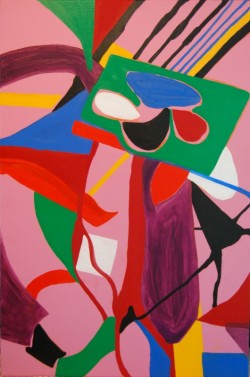 “Toys and Games” is a series of colorful, abstract oil paintings with shapes and colors which dance across each canvas.  They are designed to elicit childhood memories of play.  How children learn about the world and to communicate with other children and interact with adults is by play.  Play is a child’s most important work.

Using vision and their tactile sense, infants reach for colors and to feel hard, soft, animate and inanimate shapes around them.  Through this process of rudimentary play, they explore the elements and confines of their world.  As infants grow through childhood, play becomes more sophisticated and interactive depending on their cultural environments.

Today, there are  thousands of toys and games – most of which did not exist fifty years ago.  For the adult  viewer of these paintings, the toys and games remembered may be very different than those known to today’s children.

It is Ms. Tamborlane’s hope that these paintings will foster dialogue among older and younger generations about their special moments with the toys and games they recall and encourage individuals to take time to play with others across generational lines. 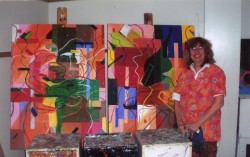 Galleries With Paintings On Display

Publications Where Paintings and Poems Appeared

“Tamborlane’s Painting Selected For An International Competition,” Cranford Chronicle, May 27, 2011.

“Boulevard Bistro Casual Italian Restaurant,” The Star Ledger, December 16, 2010 – “Accenting the restaurant’s walls are works from local artist Theodosia Tamborlane that match the theme of The Boulevard Bistro – classic with a touch of modern spunk.”