About Nina Tomczak’s collection of Russian Fine and Decorative Art

Nina Tomczak, resident of Clinton, NJ is a big collector of Russian Fine and Decorative Art. For many years her husband Stephen was employed in Moscow by various international companies. During their stay in Moscow Nina was an active member of the  International Woman’s Club, where she headed The Moscow Art Group and did a lot of charity work. That gave her an opportunity to meet various famous Russian Contemporary Painters.  And just by living there she was exposed to a beautiful Russian Decorative Art that she started to collect.

Collection in display for sell 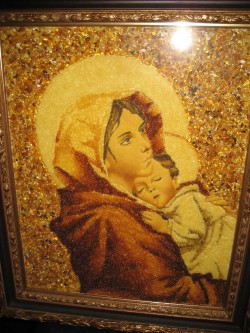 ” Virgin Mary with Child”  is  a very unique piece of art made from natural amber. Work was created by artist from Lithuania, who was working on restoration of the famous Amber Room in St. Petersburg Palace as part of project for the 300th anniversary of the city. Remnants of amber from this project were used by him to create several special Images of Madonna with Child, which are now available and on offer in Alfa Art Gallery, Year  2003, Media – argolite/ tempera/ crashed amber. 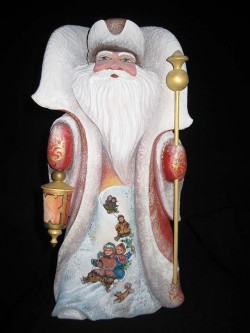 Russian hand-carved wooden Santas and Angels, each an original work of art, are richly detailed, all free-hand painted. In the style of traditional Russian storytelling art, each tells the Christmas story on their robes. Once designs are selected by painters, they move from art village to art village, where highly gifted artisans contribute their tallents to carving and painting each piece. In one village are the best wood-carvers, in another the best decorative painters, in another the illustrator renowned for the ability to paint a story. Completion of the first piece may take weeks or even months.

The designs include The Nativity Angels, The Nativity Santas, Christmas Angels, Winter Scene Angels and Santas.   Most of them are individually hand-painted by such famous decorative painters like Alexei Kikin and Galina Peregud from Sergeiv Posad – a large artistic village outside of Moscow. These gifted artists work free-hand to create the beautiful scenes and intricate decorations without using stencils or guides of any kind. Many of the techniques used in the decorating process date back centuries.  Original designs of Alexei Kikin are used by G.DeBrekht Company to make copies from wood composite. 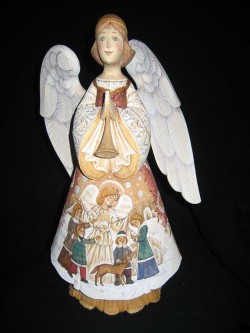 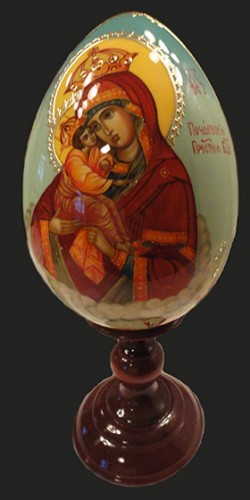 In the late 1980’s  forgotten customs and rituals returned – to give eggs to friends and benefactors on the first day of the New Year and on Birthday, including   an Easter egg on Easter Day. All world mythologies have legends treating the egg as a symbol of life, renewal, as a source of origin of all that exists in this world. Since ancient times, the egg had being the symbol of a transition from nonexistence to existence.  It was perceived as spring sun, bringing life, joy, warmth, light, rebirth of nature.Russian wooden hand-painted eggs are well-known Russian memorabilia, whose fame outside of this country is probably second  only to painted wooden matryoshka dolls .Lately, the interest toward  the eggs had being of a special nature. It is explained by its somewhat illegal status during 70 years of the Soviet era when eggs were associated with religious Holidays.

As before the 1917 revolution, wooden eggs are created in the traditional centers of Fedoskino, Palekh, Mstyora and Kholuy by individual painters. They are divided into several motif groups: religious, architectural landscape, simple landscape, literature. The painting of the religious eggs requires good knowledge of iconography and thy are painted by experienced, highly skilled professionals.
Modern eggs by individual authors are an original phenomenon in the Russian artistic culture of the late 20th – beginning of 21st centuries. The best examples of eggs  with religious images are charged with such energy and impact so strongly that they really can rose historic memory and  illuminate our souls. 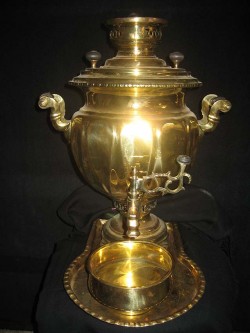 Samovars are a very uniquely Russian form of art. No one knows where a samovar appeared for the first time, but one thing is clear, that it is a purely Russian invention. They became widely spread through the country with the introduction of tea and coffee. Samovars were produced in the Urals, Moscow, St. Petersburg, Yaroslavl and Archangel but most famous was Tula, and old center of metalworking. The opening of the first samovar workshop in Tula in 1778 marked the beginning of samovars production.

Russian samovars vary in interior construction and exterior decoration and purpose. They were made from different metals – copper,  iron, silver, silver plating on copper, steal, cast iron. The earliest samovars resembled English tea urns or teas vessels. They had already the principal characteristic element –  a tube situated inside and a wind box, but a spout and a caring handle instead of a tap. The vessel was used for boiling water as well as for making a hot drink of honey with spices.

18th century samovars often imitated the traditional Russian cups and Brattain made of copper. The 19th century saw various types of samovars including conical, faceted, plain, in the form of a ball, a jar, a wine glass,a small barrel, an egg-samovar, turnip-samovar. Russian samovars were so diverse in details and ornamentation that now it is difficult to find two identical samovars in any collection. Each master had his favorite form, but every time he made a new samovar he executed it in a different way.