Niladri Paul graduated from the Govt. College of Arts and Craft, Calcutta, 1996. His artwork has been featured in solo shows in cities all over the world, most recently at Jehangir Art Gallery in March of 2012 as well as at the Vinnyasa Art Gallery in March 2012. Over the years, Paul has cultivated a unique style that is painterly and quite bold. He frames a solo figure, usually female, with strong, geometric strokes of paint. These figures are portrayed with broad brush strokes and vivid, electric colors. Lines of text and patches of vibrant hues overlay his subjects, creating a collage effect. His work could be described as lively and graphic, with strong cultural influences. Paul is fascinated by the performing arts, which speaks to the sense of action he has been able to capture in his subjects. 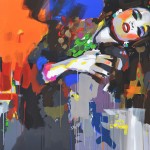 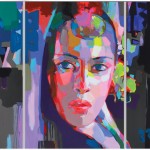 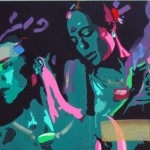 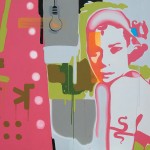